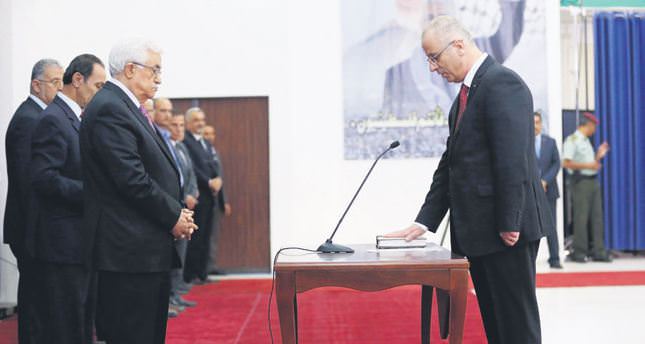 by Begüm Tunakan Jun 03, 2014 12:00 am
RAMALLAH — Foreign Minister Riyad al-Malki, an Abbas loyalist, will remain in the post despite Hamas' opposition. The transitional unity cabinet comprises independent technocrats. This measure was taken to address the issue of Hamas being part of the PA governing body, as it is recognized as a terrorist organization by Israel, the U.S. and many European countries, all of which cut aid to the Palestinian territories following Hamas' victory in 2006.

Earlier yesterday, the formation of a new unity government was put in jeopardy by Hamas' rejection of the makeup of the cabinet, which does not include a ministry of foreign affairs. According to Anadolu Agency, Hamas spokesman Sami Abu Zuhri said late Sunday that "Hamas' final position is that there must be a ministry for prisoners in any national accord government." President Abbas abolished the portfolio of Prisoners Affairs Minister, replacing it with a prisoner affairs department, an independent agency affiliated directly to the Palestine Liberation Organization (PLO) which would fall outside of the control of the cabinet. However, Hamas insisted on keeping the ministry by stating that the prisoner issue is of crucial importance to Palestinians.

Palestinian detainees held in Israeli jails are considered freedom fighters by most Palestinians while Israel denounces them as terrorists.
It is widely believed that the objection of U.S. and European aid donors over the payments made to jailed Palestinian militants and their families out of the Palestinian Authority (PA) treasury lead Abbas to scrap the Ministry of Prisoner Affairs. Eventually, this last-minute dispute has been resolved between two rivals without damaging Hamas and Fatah reconciliation deal.

The formation of a Hamas-Fatah cabinet is considered to be part of a bid to put an end to the rift between the two main factions over the last seven years. The current reconciliation deal between Hamas, the Islamist movement ruling Gaza, and the Western-backed Palestine Liberation Organization, dominated by Abbas's secular Fatah party which governs in parts of the Israeli-occupied West Bank, was agreed in late April to end the rifts for the upcoming elections in order to further strengthen their hands. According to the reports, the main reason Hamas has agreed to form an alliance with Fatah is that Hamas has long been in financial crisis. The new alliance would be a better solution as Hamas has been looking for a way out. The reconciliation deal is seen as a crucial step toward the creation of a Palestinian state. Unless the two rival parties can hold up their ends of the bargain, the fear is that it could prevent the creation of an independent Palestinian state. Previous reconciliation deals had also been announced and were warmly welcomed by the Palestinian public. However, those deals ended in failure. The current reconciliation deal is expected to pave the way for the creation of a Palestinian state through a peacefully democratic process. The new Palestinian unity cabinet is seen as a significant step to end the long standing rivalry, and offers a chance to put an end to the ongoing internal Palestinian conflict.

The new Palestinian unity government was referred to as a Hamas-Fatah "terror" cabinet by Israeli Prime Minister Benjamin Netanyahu on Sunday while calling on the international community not to recognize the Palestinian government, adding that "the international community's support for the new Palestinian government will not contribute to advancing the peace process, but will promote terrorism,"
Netanyahu said at the beginning of his cabinet weekly meeting, who added that Abbas must choose between peace with Israel and peace with Hamas.

In addition, U.S. Secretary of State John Kerry spoke Sunday with Abbas over the telephone about the new cabinet. Secretary Kerry voiced his "concerns over Hamas's role in any such government and the importance that the new government commits to the principles of nonviolence, recognition of the state of Israel and acceptance of previous agreements with it," as U.S. State spokeswoman Jen Psaki stated.
It is widely believed that Palestinian unity has faced a strong wave of opposition mainly from Israel, the U.S. and many other countries which consider Hamas as a terrorist group. A unity government that includes Hamas could lead the international community to raise their concern over the stalled peace talks and to what extent the unity cabinet with Hamas would be able to commit to principles laid out by the so-called the Middle East Quartet, comprising the U.N., the U.S., the EU and Russia.

As separate peace negotiations between Abbas and Israel were on the verge of collapse, how the Palestinian unity cabinet would affect the Palestinian-Israel peace process remains crucial for the time being.

Palestinian President Mahmoud Abbas swore in a unity cabinet backed by rival Palestinian groups Hamas and Fatah yesterday, during a ceremony at Abbas' headquarters in the West Bank city of Ramallah. A list of ministers drawn from independent technocrats was presented by Abbas during the ceremony. The Palestinian unity cabinet has 17 members including Prime Minister Rami Hamdallah, who will be taking the place of the former Hamas Prime Minister Ismail Haniyeh. Hamdallah will also serve as interior minister under the compromise with Hamas. Shukri Bishara who has been in the post since Hamdallah first became premier in June 2013, will serve as finance minister.
Last Update: Jun 03, 2014 1:27 am
RELATED TOPICS