Ceasfire in Yemen after airstrikes kill 140 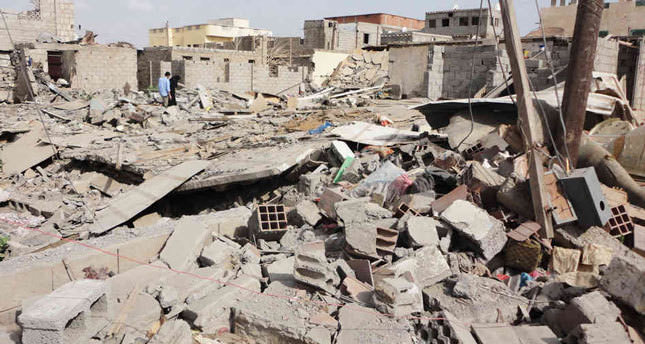 by Jun 04, 2014 12:00 am
SANAA — A ceasefire between Shi'ite Muslim forces and the government went into effect on Wednesday, the Yemeni Defence Ministry said, after fresh fighting and air strikes killed a total of 19 people from both sides.

Nearly 140 people have died in three days of fighting near the town of Omran, where government forces and allied Sunni Muslim tribesmen have been trying to hold back the powerful militia from capturing the city for nearly two months.

U.S.-allied Yemen, an impoverished country of 25 million that shares a long and porous border with the world's top oil exporter Saudi Arabia, has been in turmoil since 2011, when mass protests forced long-ruling president Ali Abdullah Saleh to step down.

The fighting in northern Yemen, which had taken on a sectarian tone, has further unsettled a country struggling to overcome many problems.

The Defence Ministry said the agreement, which calls for deploying neutral observers to monitor the truce, had taken effect from 1200 (0900 GMT).

It also called on both sides to stop sending reinforcements to Omran, withdraw from the central prison and open the main road between Omran and the capital Sanaa.

The agreement came after the fighting which began earlier this week intensified with the Yemeni army using the air force to deliver deadly strikes on Houthi rebel positions in Omran.

Ahmed al-Bekry, deputy governor of Omran province, said on Tuesday that more than 100 rebels and about 20 government soldiers had died in fighting and in air strikes on Houthi positions the day before.

Hours before the ceasefire went into effect, Houthi fighters killed five government soldiers in clashes outside the city of Omran, according to Houthi rebels, who also said that 40 government troops surrendered to the group.

The groups' top leader, Abdel-Malik al-Houthi, proposed a ceasefire on Tuesday night and offered to free 100 government soldiers held by the group as part of an agreement with the Defence Ministry that would guarantee the safety and security of Omran's inhabitants.

"We are willing to cooperate in a manner that would serve security and stability," Abdel-Malik said in the statement.

The Houthis blame elements of the Sunni Muslim Islah party in the military and in the Omran regional administration for the fighting.

Government officials say the Houthis, who have been fighting government forces sporadically since 2004, are trying to tighten their grip on the north before next year's election, as Yemen considers moving to a system of greater autonomy for its various regions.

As well as the fighting in Omran, where the Shi'ite tribal militia is trying to cement its control over the northern highlands, Yemen is facing a threat from al Qaeda and a challenge from separatists in the south.

Clashes have repeatedly erupted in the past few months between government troops and Houthis - named after the Shi'ite
tribe of the leaders of the rebellion - as Sanaa struggles to restore nationwide control.