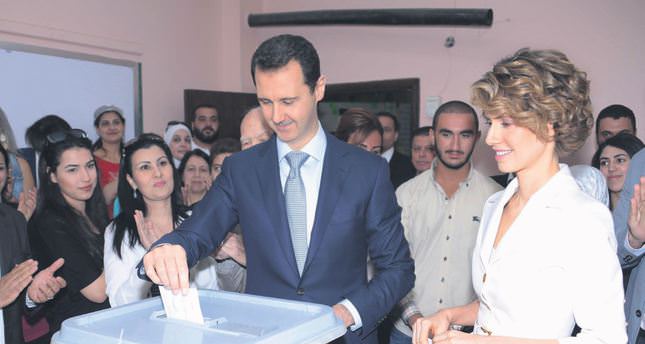 by Begüm Tunakan Jun 04, 2014 12:00 am
Boycotted by the opposition and held only in regions controlled by Syrian leader Bashar Assad, presidential elections, or "blood elections" as referred to by most Syrians, get underway with no one expecting anyone but the leader responsible for more than 160,000 deaths to win.

In the midst of civil war, Syrians voted yesterday in government-held areas for the country's presidential election while Syria's two main internal opposition groups boycotted the vote, referring to it as "blood elections," according to AP reports.

Before the balloting took place in areas under government control, clashes between opposition groups and al-Assad's forces continued violently, as rebel rocket fire on government- controlled areas of Aleppo killed 50 people over the weekend. The fighting proves it was centered in areas not held by al-Assad's forces meaning the government was not able to provide security for its citizens, thereby making it impossible to hold a truly democratic election. When it comes to political participation of Syrians, it is inconceivable to think of fair elections taking place.

According to AP, the Interior Ministry stated that there were 15.8 million eligible voters, both inside and outside Syria, and that 9,600 voting centers have been set up around the country. However, political opposition in exile, refugees and rebel fighters would not be eligible to vote in the election. Damascus ruled out the participation of any opposition group through adopting a new law restricting the candidacy of those who hold Syrian nationality and continuously reside in the country for the past 10 years.

These criteria prevent any opposition candidates from running against President al-Assad in the election. Most of Syria's 6.5 million people have been internally displaced and more than 3 million Syrians have registered as refugees, making them ineligible to vote. The reports state that tens of thousands Syrian expatriates and refugees cast their ballots last week in an early round of voting. However, when the 3 million Syrians living abroad are taken into account, there are still a vast majority unable to vote.

Syrian refugees and expats headed to the polls to cast their votes in Jordan and Lebanon, despite the fact that a significant number of Syrian refugees live in different countries, excluding them from voting.

In the light of aforementioned circumstances in Syria, it can be concluded that democracy, literally meaning "rule by the people," cannot be exercised amid an ongoing civil war.

Assad's regime has been held accountable for the terror and the ongoing civil war, numerous war crimes, widespread violation of human rights and international humanitarian law. Jen Psaki, U.S. State Secretary spokeswoman, in a daily press briefing on June 2, denounced the election as a "farce," adding that the election was not democratic and limited "an opportunity for people in a free society to be consulted and to play an important role in choosing their leaders."

NATO Secretary General Anders Fogh Rasmussen also points out that he would not recognize the outcome of the election, adding that "[the election] does not fulfill international standards for free, fair and transparent elections and I am sure any [NATO] ally will recognize the outcome of these so-called elections." "The Syrian presidential election is a farce," Rasmussen said in Brussels.

Apart from the U.S., many other Western powers including Turkey and Gulf Arabs had denounced the election calling it utterly "devoid of political participation of millions of Syrians" in the London 11' Core Group of Friends of Syria Communiqué on May 15.

The ministers of the London 11 countries at a meeting agreed upon not recognizing the "illegitimate presidential election; calling it "the Assad regime's unilateral plan" and a "parody of democracy."

Halit Hoca, Turkey's representative to the Syrian National Coalition, underscored the message President al-Assad wanted to convey through holding presidential elections. "Assad wants to keep controlling the government- held area including the capital Damascus which would pave the way to the disunity of the country," said Hoca.

The election was held three years after protests first broke out in Syria, in a country dominated by the al-Assad family over the last four decades. However, the uprising has turned into a violent civil war, as tension has gradually increased. The last seven presidential elections were held to approve Bashar or his father, Hafez Assad. The outcomes of each of the seven elections have ended al-Assad family scoring no less than 99 percent of the votes. Assad ran against his two rivals; the former minister Hassan al-Nouri and parliamentarian Maher Hajjar.
RELATED TOPICS