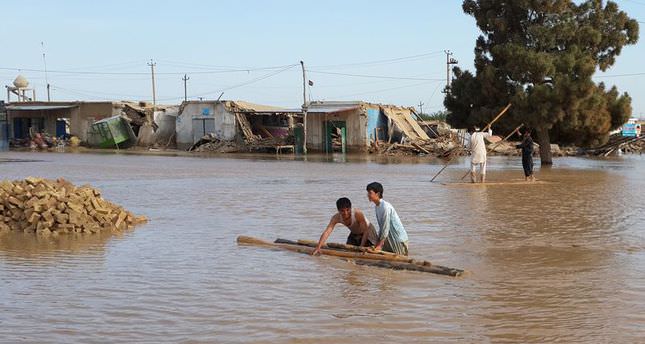 by Jun 08, 2014 12:00 am
KUNDUZ — Rescuers scrambled Sunday to deliver food and medical supplies to Afghan families marooned on mountaintops after flash floods killed 80 people in a remote northern district, washing away hundreds of homes and forcing thousands to flee.
The death toll was expected to rise, with scores of people said to be missing in the mountainous district of Baghlan province after torrential rains unleashed the floods on Friday.
The floods come a month after a landslide triggered by heavy rains buried a village and killed 300 people in a nearby region.
The twin disasters highlight the challenges facing underdeveloped Afghanistan's next leader as the country heads into the second round of the presidential election on June 14.
"People have lost everything they had -- houses, property, villages, agricultural fields, cattle," Baghlan police spokesman Jawed Basharat said about the floods.
"There's nothing left for them to survive. People don't even having drinking water," he said.
Television channels relayed footage of one man wading through a gushing stream of muddy brown flood waters, his back stooped under the weight of a burlap sack.
;
Basharat said the death toll had climbed to 80. The Afghan army, he added, was battling to deliver aid to the affected families, many of whom have fled to mountaintops to escape flood waters.
Afghanistan's defense ministry had dispatched two helicopters to deliver aid packages to the area as roads and mountain passes were left devastated by the floods, said Obaidullah Ramin, an MP from Baghlan province.
"Some nine kilometers of roads were destroyed by floodwaters, so officials are trying to deliver aid by air," Ramin told AFP, confirming that 80 bodies have so far been recovered by authorities.
"Relief agencies have distributed some aid, but it is not enough. The problems of the flood-affected people need to be addressed fully," he said, adding that he had toured the affected areas.
Most disaster management officials were difficult to reach Sunday due to poor telecommunication networks in the remote area.
The governor of the province, Sultan Mohammad Ebadi, warned the extent of the disaster was "massive".
Bodies of women and children were among those recovered from the inundated areas, the National Disaster Management Authority (NDMA) said, adding that scores of people were missing.
"There is a lot of stagnant water, and there are more bodies under the rubble and mud," Mohammad Nasim Kohzad, head of NDMA in Baghlan, told AFP.
"We are still looking for other victims of this flood."
"The floods destroyed four villages, and washed away 2,000 residential houses, agricultural fields and also killed thousands of cattle," Noor Mohammad Guzar, the governor of the remote affected district of Guzargah-e-Nur, told AFP.
Officials were further assessing the extent of the damage on life and property in the affected area, Mohammad Aslam Sayas, the deputy head of the National Disaster Management Authority, said.
"Our teams have also provided some edibles (food items) and medication to the affected people. More aid will get there soon," he said.
Outgoing Afghan President Hamid Karzai in a statement said he was saddened by the loss of life and property in Baghlan province, and directed disaster management officials to dispatch emergency relief aid to affected families.
Last month a landslide triggered by heavy rains buried a village in a remote area of northeast Badakhshan province, killing at least 300 people.
The May 2 disaster left hundreds of families homeless in Argu district of the mountainous province which borders Tajikistan, China and Pakistan.
The floods and landslides follow recent severe flooding that have affected a vast swathe of Afghanistan, particularly northern provinces, leaving 175 people dead and tens of thousands displaced.
Flooding and landslides often occur during the spring rainy season in northern Afghanistan, with flimsy mud houses offering little protection against rising water levels and torrents of mud.
Afghanistan is currently voting to choose a successor to Karzai, who has been in power since the fall of the 1996-2001 Taliban regime.
Afghan presidential front-runner Abdullah Abdullah faces former World Bank economist Ashraf Ghani in next week's vote run-off.
Last Update: Jun 08, 2014 4:56 pm
RELATED TOPICS