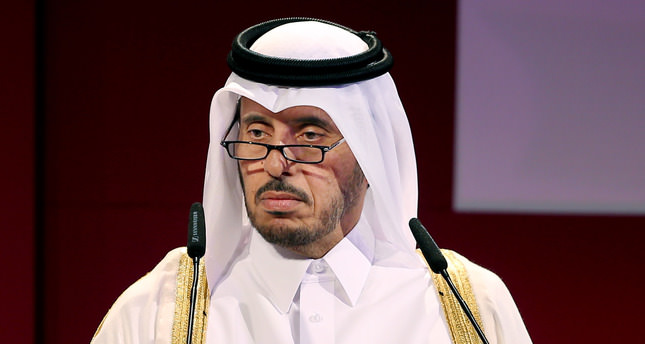 by Jun 09, 2014 12:00 am
DOHA — Qatar's prime minister on Monday urged the UN Security Council to impose a ceasefire in Syria and intervene to end the deadly conflict that he said threatens regional stability.

"It is incumbent on the international community, especially the Security Council, to act urgently and decisively to adopt a resolution imposing a ceasefire to ensure the security and safety of the Syrian people as well as stability in the whole region," said Sheikh Abdullah bin Naser bin Kahlifa al-Thani.


Speaking at the 11th annual US-Islamic World Forum in Doha, Qatar's premier also warned that the "Syrian crisis poses a real threat to the unity of Syria," according to a copy of his speech published by the official QNA news agency.

Qatar had voiced support for the Arab Spring-inspired uprising that erupted in Syria in March 2011 but which later deteriorated into all-out civil war following a brutal crackdown on dissent by President Bashar al-Assad's regime.


The conflict has killed more than 162,000 people and displaced millions.


"The situation requires joint efforts by the international community to end bloodshed and... fulfil the legitimate aspirations of the Syrian people," said Sheikh Abdullah.


Russia and China, staunch allies of Assad, have so far blocked any attempts by the UN Security Council to pass a strong resolution on Syria.


Former UN envoy for Syria Lakhdar Brahimi has warned that the war-torn country is heading toward becoming "another Somalia" ruled by warlords.


He also warned, in an interview published in a German weekly at the weekend, that the entire region may "blow up" if a political solution for Syria is not found.