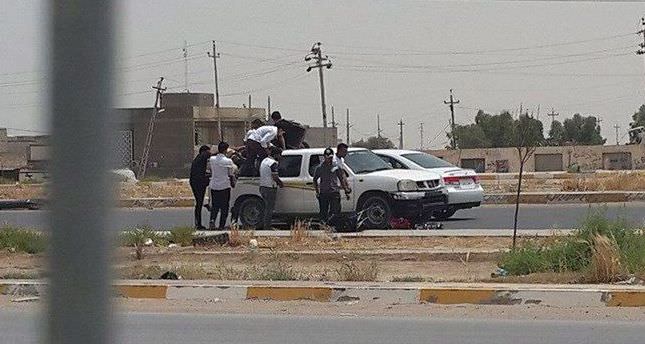 by Jun 10, 2014 12:00 am
ISTANBUL — Turkey is investigating reports that 28 Turkish truck drivers ferrying diesel to the northern Iraqi city of Mosul have been abducted by militants from an al Qaeda splinter group, senior Turkish officials said on Tuesday.

Insurgents overran the headquarters of the provincial government in Mosul late on Monday, making further gains in a fourth day of fighting in the country's second-largest city.

Turkish media reports said the drivers were taken hostage by militants from the Islamic State of Iraq and the Levant (ISIL) while carrying diesel from Turkey's southern port of Iskenderun to a power plant in Mosul.

"The situation in Mosul looks a bit grim ... Concerning the 28 truck drivers, we are trying to confirm through our consular department but we have nothing as yet," one Turkish official told Reuters.

An official at Ikra Logistics, a trucking company based in the southern Turkish city of Adana which ships diesel to Mosul, said it had lost contact with some of its drivers and that they could be among those reportedly abducted.

"Their phones are switched off," the official said, declining to be identified or to comment further as the situation remained unclear.

An official in Prime Minister Tayyip Erdogan's office also said the reports were being investigated, while Transport Minister Lutfi Elvan said he had no information of an abduction.

The western side of Mosul is now under the control of the militants, three Iraqi army officers told Reuters, while a senior Iraqi security official warned the whole city could fall into their hands if supporting troops were not sent in.

Turkey has for years supplied refined oil products to Iraq, which is chronically short of diesel due to a lack of refineries and increasing power consumption.

ISIL is also active in Syria's civil war, controlling patches of territory along the Turkish border. It was disowned by al Qaeda's central command earlier this year after it fell into territorial and power struggles with Jabhat al-Nusra rebels, who comprise al Qaeda's official Syria wing.

Syria, tugged by various regional conflicts, has fragmented into a patchwork of warring ethnic and sectarian pockets, and fighters from neighbouring Iraq and Lebanon have joined both sides of the civil war.

Turkey has been a staunch backer of the Syrian opposition, letting it organise on Turkish soil and hosting hundreds of thousands of Syrian refugees. But the rise of Islamist militants in rebel ranks presents it with a growing security risk.

Turkish special forces raided a suspected ISIL hide-out in Istanbul in March, leading to a gun battle, weeks after two members of the security forces were shot dead in southern Turkey by militants suspected of links to militant groups in Syria.