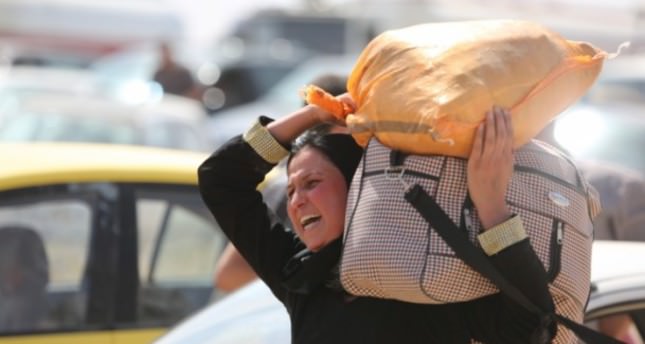 by AA Jun 11, 2014 12:00 am
Hundreds of thousands of residents have fled the northern Iraqi city of Mosul and taken shelter in Duhok and Irbil provinces after the Islamic State of Iraq and the Levant (ISIL) seized Iraq's second-largest city.

The residents gathered at a security checkpoint between Irbil and Duhok which is controlled by Kurdish Peshmerga troops, who distributed food and water to them. Irbil authorities are establishing a camp for the families who came from Mosul.

Rizgar Moustafa, the district governor of Khabat in northern Iraq, told that the fighting in Mosul had intensified, forcing thousands to come to Irbil.

He added that they did not let entry into city center as there were too many people seeking shelter.

A government official from Iraq's Kurdish regional government claimed that the armed force of the central Iraqi government "handed down" Mosul without showing any resistance against ISIL militants.

Mosul has been home to violent clashes between the Iraqi security forces and ISIL militants since Friday, which left scores of people dead.
Outgoing Prime Minister Nouri al-Maliki said earlier Tuesday that Iraq had been placed on "maximum alert" after ISIL militants seized control of Mosul, the country's second-largest city.

Iraq's parliament will also hold an emergency meeting on Thursday to discuss ongoing "security chaos" in the northern city of Mosul and across the country.

ISIL march on to other cities

Militants from the Islamic State of Iraq and Levant (ISIL) have reportedly seized more areas in northern Iraq, one day after they had captured Mosul, the country's second largest city.

Officials in Suleiman Bek town in Saladin province said that scores of ISIL militants had poured in as police forces abandoned their posts.