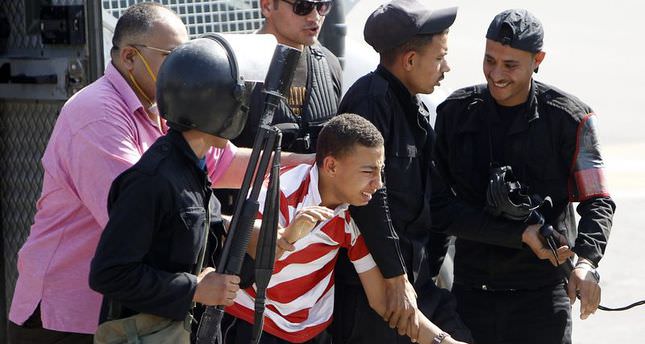 by AA Jun 11, 2014 12:00 am
A student group that supports ousted Egyptian president Mohamed Morsi has said at least 197 university students had been killed since Morsi's ouster last year by the army, a number that was challenged by a security official.

In a report, the pro-Morsi Freedom Student Observatory said that Al-Azhar University, a traditional stronghold for Morsi's Muslim Brotherhood, came at the top of the list in terms of students slain – it put the number at 74, including two female students – during clashes with security forces.

Another 1812 students were arrested during the same period, including 33 female students, amid an ongoing crackdown on Morsi supporters launched by Egypt's army-backed interim authorities following his removal from office last summer.

Since the beginning of the academic year last September, many Egyptian universities have seen almost daily protests by pro-Morsi students, staged to denounce last summer's "military coup" against the elected president.

Around 380 students were convicted – including 54 in absentia – of varying offenses, the report said. The remaining students have been detained pending trial, mostly on violence-related charges.

Jail terms handed down on student protesters come to a total 1721 years of imprisonment, including 13 life sentences (25 years), while total fines equaled some $745,000, according to the report.

A security source, for his part, dismissed the figures as "inaccurate," saying they "do not reflect reality."

"The security agencies deal with rioting [on university campuses] in accordance with the law, regardless of the rioters' professions or backgrounds," he said on condition of anonymity.

Yet he added that the Interior Ministry had no precise figures for the number of students killed or arrested during recent confrontations with police.