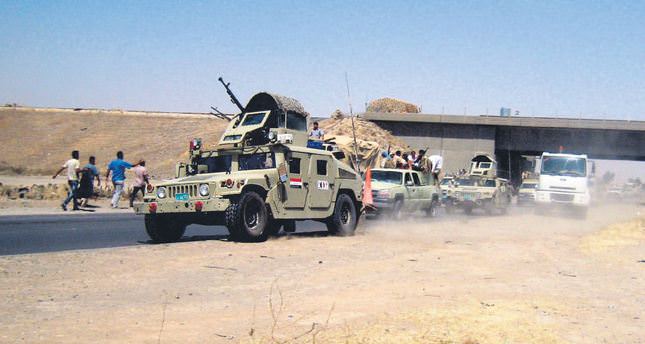 As ISIL militants move closer to the capital city, threatening Iraq's future as a unified state, the Iraqi government is looking to launch operations in the north and recapture territory lost earlier this week

As the Iraqi government has failed to stop the militants seizing two key Sunnidominated cities in Iraq this week, a leader in the Islamic State in Iraq and the Levant (ISIL) called on the insurgents to advance on the capital Baghdad. Abu Mohammed al-Adnani, the ISIL spokesman, said in an audio message "Don't give up an inch you have liberated unless over your dead bodies," adding that the southern Iraqi Shiite cities of Karbala and Najaf, hold the holiest sites for Shiite Muslims would also be captured by ISIL. "The real battle will be in Baghdad and Karbala," said Abu Mohammed Adnani Shami, who presented himself as ISIL's spokesperson, according to AA reports. As militants are closing in the capital of Iraq, it appears that the militants would likely meet strong resistance from government forces and Shiite militias.

So far, ISIL fighters have stuck to the Sunni dominated areas. The militants also would likely meet far stronger resistance, not only from government forces but by Shiite militias if they tried to advance on the capital. Since heavy clashes broke out, fighters from the militant group have seized 10 towns in the Salahuddin province of northern Iraq, according to the Anadolu Agency, as they are approaching Baghdad.

Considering Iraq's armed forces had handed over the city to the militants while withdrawing from the eastern and western parts of Mosul, Iraqi Prime Minister Maliki commented on the Iraqi unrest saying that "What happened in Mosul is just a conspiracy. We are searching for ways to provide security to the region, instead of being part of that conspiracy." He did not give any further details about the conspiracy.

He also stated that restructuring Iraqi security forces would be required in order to extend military troop's capabilities to gather its forces for a counter-offensive in occupied northern territories. Regarding the government forces' withdrawal, the headquarters of the provincial government and the Nineveh Operations Command, some governmental and private sector banks as well as the airport of northern provinces were easily seized by the militants of ISIL on Tuesday. Nineveh Governor blamed the Iraqi government for not being able to protect Mosul against militants' heavy attacks while appealing its citizens to form selfdefense militias in their neighborhoods in order to limit ISIL next moves. The reports shows that Mosul's fall was seen a significant defeat for Maliki's government. Hours after Maliki's statement, the Iraqi air force started bombing militant positions in Mosul in an apparent attempt at regaining authority over the city.

In addition, the latest reports shows that the Iraqi army has retaken full control of the central city of Tikrit, a day after militant has captured on Wednesday Saddam Hussein's hometown of Tikrit. Meanwhile, Iraq's parliament has postponed Maliki's call for a state of emergency. Iraq had declared state of emergency after ISIL took over Mosul.

According to Reuters, Iraqi Oil Minister Abdul Kareem Luaibi stated that the government forces have taken Iraq's Baiji oil refinery, the country's largest, under control. An official at the oil refinery said that "The Baiji refinery is totally secured by the Special Forces and operating normally now." The ISIL militants reportedly have advanced on Baiji on Wednesday, setting the government buildings and police station on fire. The oil refinery town of Baiji is of crucial importance where most oil pipelines and power stations were established. After the militants announced their march toward Baiji, Iraqi security forces were sent to the area to secure energy installations, security officials said.

Iraqi oil hub of Kirkuk has been in control of Kurdish forces since yesterday to protect the area against by radical Sunni insurgents from ISIL that have seized northern provinces of the country stretching from the Syrian border to the western gates of Baghdad, said a Kurdish military spokesman. "The whole of Kirkuk has fallen into the hands of peshmerga," said Jabbar Yawar, adding that "No Iraqi army remains in Kirkuk now," as Reuters reported. Following Iraqi soldiers abandoned their bases at the city, Kurdish armed forces called the peshmerga has gained control over the region. Iraq's oil-rich city of Kirkuk has witnessed a long-running dispute between Baghdad and Iraqi Kurds who want to incorporate it into their own autonomous region. As ISIL has been posing a greater threat for many Iraqi Kurds living in and around northern provinces of the country, Kurdish forces need to provide a safe environment regarding issues such as the international marketing of Kurdish oil and revenue-sharing between Baghdad and Kurdish Regional Government (KRG).

Late Monday, ISIL has launched its major offensive and since then, the insurgents overrun the entire northern province of Nineveh and the southern province of Salahuddin. The military assault began in Nineveh provincial capital Mosul, Iraq's second-largest city while Sunni insurgents overpowered government soldiers that followed with mass exodus to more secure places. With regard to the increasing insecurity, around 150,000 people reportedly had left their homes as authorities set up camps in nearby towns.
Last Update: Jun 13, 2014 12:39 am
RELATED TOPICS