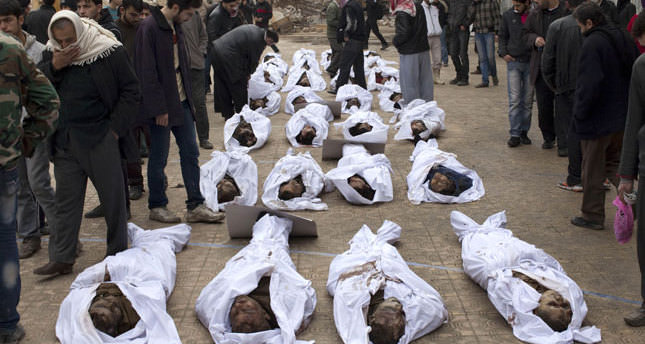 by AA Jun 12, 2014 12:00 am
A series of photographs showing 11,000 detainees tortured at the hands of the Syrian regime has been discussed at a panel in Geneva held by the United Nations Human Rights Council.

During the opening speech of the panel on Tuesday, Mehmet Ferden Çarıkçı, Turkey's permanent representative at the U.N.'s Geneva office, said that tens of thousands of people including women and children were subject to torture in Syria's prisons.

What the world encounters in Syria is a unique form of barbarism, Çarıkçı said. On Jan. 21, 55,000 photographs showing 11,000 tortured detainees were published along with a detailed 31-page report titled "Syria war crimes evidence." The photos were provided by a former Syrian army police officer, known by the codename "Caesar."

"Caesar," who served 13 years in the Syrian army, gave the photos of the tortured and executed detainees to an inquiry team based in the U.K., and the agency report accompanied by the photos shook the global agenda, making headlines in media around the world. Desmond Lorenz de Silva, a member of the commission who prepared the "Caesar report," said at the panel that they verified the photographs' authenticity. Another member of the commission, Professor David Crane, said the evidence displayed undeniable war crimes and crimes against humanity. He said the photos could be regarded as evidence in any court, adding that the Assad regime's acts constituted a systematic and large-scale massacre.

Syria has been gripped in an ongoing civil war since 2011 in which more than 100,000 people have been killed and close to half of the 22-million population displaced, according to the U.N.
Last Update: Jun 12, 2014 1:01 am
RELATED TOPICS