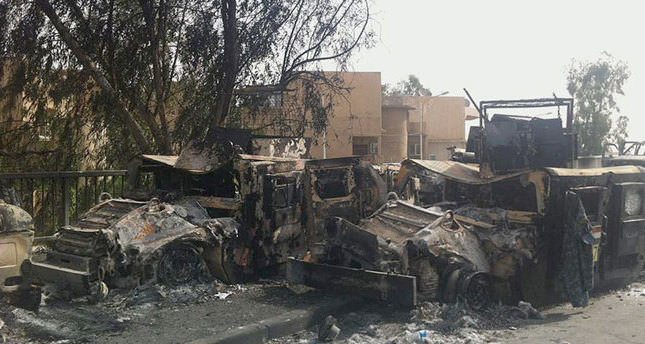 by AA Jun 13, 2014 12:00 am
The United Nations bodies have launched emergency operations to help people affected by the conflict in Iraq's Mosul where half a million people have been displaced in the last week.

"The United Nations World Food Programme is launching an initial emergency operation to provide food assistance to 42,000 of the most vulnerable people displaced by conflict this week in Iraq," the agency's spokesperson Elisabeth Byrs said Thursday in a press conference at the UN Office in Geneva.

The agency is planning to deliver about 550 metric tons of food a month as part of the operation.

The aid convoys will reach the families displaced by the conflict through the Turkish border, Byrs said

"Along with the newly displaced, World Food Programme is already assisting about 240,000 people displaced by conflict in Iraq's al-Anbar region, as well as more than 100,000 refugees from the conflict in Syria, who are sheltering in Iraq," the agency said in a statement on Friday.

Jane Pearce, agency's country director in Iraq, said there were reports of unavailability of food in the shops in some areas on the borders between autonomous Iraqi Kurdish administration and regions controlled by the central government.

The UN refugee agency, or UNHCR, said that the shortage of shelter was emerging as a key challenge for Iraqis who fled violence in Mosul over the last week.

"Some 300,000 people have sought safety in the Erbil and Duhok governorates and UNHCR monitoring teams report that many arrived with little more than the clothes they were wearing," UNHCR spokesman Adrian Edwards said on Friday in a press conference in Geneva.

Regarding the newly displaced people in Mosul, Edwards said: "Many people have no money, and nowhere to go. While some stay with relatives, others are temporarily in hotels where they are exhausting what funds they have. Many families in Duhok are also sheltering in schools, mosques, churches and unfinished buildings."

"A growing number of people are now staying in a hastily set-up transit camp near the Khazair checkpoint, some 40 kilometres from Mosul," he added.

The number of Iraqi refugees increased by 800,000 in 2014 due to the fighting between government forces and rebels including ISIL fighters, according to the refugee agency.

The International Organization for Migration has also announced that it launched an emergeny operation to aid the people affected by the conflict.

"The fall of Mosul-Iraq's second city-to Armed Opposition Groups this week displaced an estimated half a million people," the organization said in a statement Friday.

The organization announced it was planning to distribute urgently needed relief to the affected population of Mosul.