Iraqi Sunnis had no choice but to fight: Hashimi 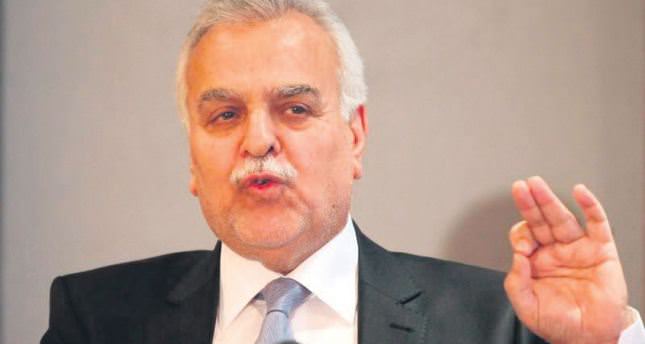 by Abdülkadir Karakelle Jun 14, 2014 12:00 am
Iraq's former Vice President Tariq al-Hashimi spoke to Daily Sabah regarding the latest unrest in Iraq and said Maliki's sectarian policies have swept Iraq into to a chaotic atmosphere Under the U.S.-led occupation and policies of successive governments, Iraq has been subject to widespread devastation of its infrastructure, society and economy. "Most importantly, the people of Iraq lost their faith in both democracy and politics," Tariq al-Hashimi, the former vice president of Iraq, told Daily Sabah in an interview on April 26, 2014.

Governments that have come to power championing discourses of peace, equality and democracy, are the ones that were brutally punished by the will of the Iraqi people, al-Hashimi said. Al-Hashimi, the man who was elected by the people as vice president, now lives in exile in Turkey and Qatar, but is still considered the embodiment of the Iraqi people's disbelief in democracy.

Al-Hashimi, who was sentenced to death in his home country based on allegations that he was directly involved in killing a female lawyer and a general in the Iraqi army, spoke to Daily Sabah on Thursday about the latest developments in Iraq.

Daily Sabah: You are still considered by many to be the most influential Sunni political figure in Iraq. As an influential Sunni figure, you are expected to be part of negotiations between Turkey and Sunni tribes and ISIS concerning the Turkish hostages. Have you played a role in negotiations? If you have, what was your role?

Tariq al-Hashimi: I am deeply concerned about the Turkish hostages and pray for their early release and offer my services for Turkey any time. I have received an indirect request from Iraq but declined to get involved unless the release is guarantee in one way or another.

DS: What is your evaluation of Maliki's soldiers fleeing from their bases in Mosul? Do you think this is a martial maneuver, or a sign of weak organization in the Iraqi Army? It is known that the Iraqi army, is composed of hired and mostly-Shi'a soldiers. Can we say that they did not want to die for money?

TH: The army organization is weak in terms of doctrine, leadership and poor in qualified personal ...etc. In brief, Iraq lacks a modern army. It was originally built in the wrong way. The U.S. administration bears entire responsibility.

DS: Iraqi Sunni people held peaceful demonstrations for more than a year particularly in el-Anbar and other cities of Iraq against Maliki's sectarian policies. But now they are grabbing their weapons again. It is said by international media that Sunni tribes are cooperating with ISIL. Can you confirm that information? What kind of deal have they made with ISIL? What is your opinion about cooperation between ISIL and Sunni tribe forces?

TH: The Sunnis had no other option but to defend themselves and use arms. We reached a point of to be or not to be. ISIL groups are there and it is difficult to avoid them although they are not welcome. To the best of my knowledge no agreement been fixed between said parties ...but I am sure there is a mutual understanding for coordination to put an end for the Sunni tragedy is there.

DS: After ISIL's attack on the Turkish consulate what will change in Iraq politics? Do you believe that ISIL can establish an order in Iraqi territory?

TH: I hope you consider the incident to be an isolated case. I am optimistic that problem will be solved soon. Iraq will never fall into the swamp of terrorism. Iraqi traditional culture is tolerant and moderate.
Last Update: Jun 14, 2014 2:09 am
RELATED TOPICS