Shiites volunteer to fight against ISI L as militants advance 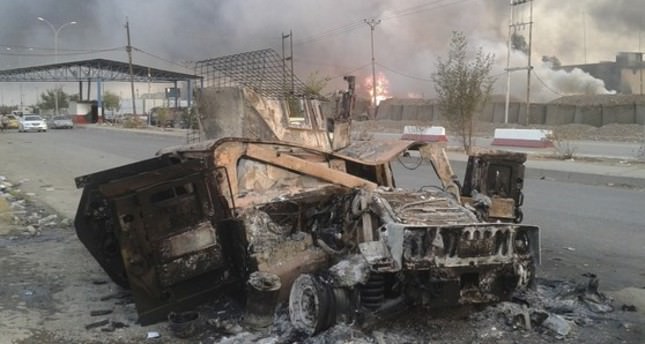 by Anadolu Agency Jun 14, 2014 12:00 am
Hundreds of people have volunteered to fight in the Iraqi army against a major offensive by the Islamic State of Iraq and the Levant (ISIL), which has taken over Mosul and other northern provinces. The report comes hours after militants vowed to march toward the Iraqi capital.
Meanwhile, a representative of Iraq's most influential Shiite cleric, Grand Ayatollah Ali al-Sistani, also urged people in a sermon at Friday prayers to take up arms and defend their country.

Sheikh Abdulmehdi al-Karbalai, who was delivering a sermon at Friday prayers in the city of Karbala, a city considered holy to Iraq's majority Shiites, said those killed fighting the militants would be martyrs. "People who are capable of carrying arms and fighting the terrorists in defense of their country...should volunteer to join the security forces to achieve this sacred goal," Karbalai said.

Iraqi forces clashed with militants advancing on the city of Baquba - just 60 kilometers north of Baghdad - on Friday as an offensive spearheaded by militants drew closer to the capital.

Security forces were battling militants on the outskirts of Muqdadiyah, 35 kilometers northeast of Baquba, police and army officers said.Baquba is the capital of Diyala province, whose mixed Arab and Kurdish, Sunni and Shiite, population has made it a byword for violence ever since the U.S.-led invasion of 2003.

The militants have already captured two provincial capitals this week: Tikrit in Salaheddin province and a second city, Mosul, in Nineveh.
Diyala deputy governor Furat al-Tamimi said Kurdish security forces were in control of the Saadiyah and Jalawla districts of the province after the Iraqi army withdrew.

Commanders said late on Thursday that the two areas were in the hands of Sunni Arab militants. The lightning advance launched by the militants in Mosul late on Monday has allowed Iraqi Kurds to take control of a swathe of disputed territory, including the city of Kirkuk.
Baghdad has long opposed that these territories be incorporated into the Kurdish autonomous region in the north.

President Barack Obama said Washington was examining "all the options" to help Iraq's beleaguered security forces resist the offensive.
Washington has found rare common cause with its longtime foe Tehran, with both voicing dismay at the militants' advance and pledging to boost aid to the Shiite-led government.

ISIL spokesman Abu Mohammed al-Adnani vowed its fighters would press on to the capital and, further south, to the Shiite shrine city of Karbala, visited by millions of pilgrims from around the world each year.

Meanwhile, a Kuwaiti official on Thursday warned against the rising danger posed to the Middle East region by the self-styled ISIL, calling for stepped-up regional security cooperation for countering this organization.

Kuwaiti Foreign Ministry Undersecretary Khaled Al-Jarallah, in a statement, reiterated his country's warning against the threat posed by the organization on the region, saying member states in the Gulf Cooperation Council need to adopted better coordination in terms of security. "We had warned about the perilous nature of the situation in Iraq before," Al-Jarallah said.

Over the past few days, ISIL, which is made up of hundreds of Arab and foreign militants, managed to overrun vast swaths of land in Iraq, forcing tens of thousands of Iraqi soldiers to flee their posts and leave their military equipment behind.
RELATED TOPICS