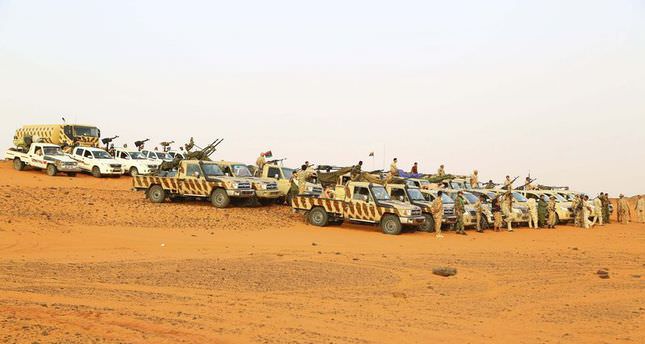 BENGHAZI — Uncertainty has shrouded an early Sunday onslaught by forces loyal to renegade Libyan general Khalifa Haftar on areas held by Ansar al-Sharia militia in the eastern city of Benghazi.

A leader from the self-styled Revolutionaries' Operations Room, a group of militants who had fought against late leader Muammar Gaddafi before later joining the regular Libyan army, said Ansar al-Sharia had forced Haftar's troops to retreat from eastern Benghazi.

"Haftar's forces were met with fierce resistance from Ansar Al-Sharia and the revolutionaries, forcing them to retreat," Talal Mohamed told Anadolu Agency.

He said that the revolutionaries had seized vehicles used by Haftar's forces, but declined to comment on casualties from the fighting.

"This is an ongoing battle and it's difficult to have precise information about victims now," added Mohamed.

But a Haftar commander, however, said they had defeated the militiamen and advanced to the suburbs of Benghazi.

Saqr al-Grouch, the commander of Haftar's air force, told AA that they were now waging battles with heavy and light weapons in different areas of Benghazi.

He added that their aircraft would be targeting reinforcements on the way to join Ansar al-Sharia and the revolutionaries.

Eyewitnesses told AA that they had heard rocket attacks and that movement in Benghazi has come to an almost standstill.

Even with this, state-run hospitals in Benghazi have not reported causalities from the clashes.

Haftar has declared war on militias in the eastern parts of Libya more than a month ago, but the government has dismissed his campaign as an attempted coup.