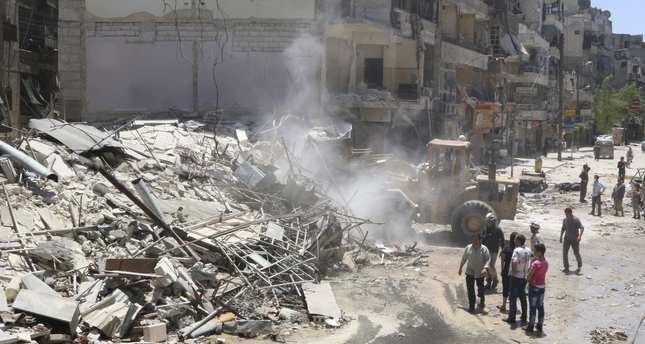 by Associated Press Jun 16, 2014 12:00 am
BEIRUT — An airstrike in the northern Syrian city of Aleppo killed 20 people on Monday as helicopter gunships pounded a rebel-held neighborhood, two activist groups said.


The Britain-based Syrian Observatory for Human Rights and the Aleppo Media Center said the bombing occurred in the city's Sukkari neighborhood and that there were children among the victims.
The Observatory said 20 people died while the Aleppo Media Center put the death toll at 30. Disparate figures are often common in the immediate aftermath of large attacks.
Both activists groups said scores of wounded were rushed to makeshift hospitals in the city. The attack struck near a center where aid was being distributed, which caused the large number of casualties, they said.
The Observatory released a photograph it said was of the aftermath of the strike, showing a heavily damaged building with one of the shops on the ground floor on fire. Debris and electric cables were scattered in the street. The photograph appeared genuine and matched Associated Press reporting of the event.
The Syrian military has been dropping barrel bombs crude weapons stuffed with gasoline that inflict much devastation on impact over Aleppo's rebel-held areas. The Observatory, which relies on reports from activists on the ground, said the airstrikes have killed more than 2,000 since January.
Aleppo, Syria's largest city, has been carved up into rebel- and government-controlled areas since opposition fighters launched an offensive in the country's north in mid-2012.
Syria's conflict, now in its fourth year, has killed at least 160,000 people, according to activists, and forced nearly 3 million to flee the country.
Last Update: Jun 16, 2014 3:07 pm
RELATED TOPICS