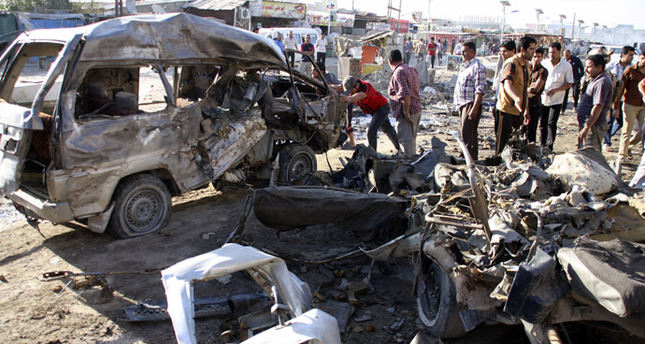 by AA Jun 16, 2014 12:00 am
Militants fighting the Iraqi government Monday claimed further advances in the north of the troubled country, as neighboring Jordan doubled its forces on the border.

The self pro-claimed Islamic State of Iraq and Syria (ISIS) said it had captured the northern town of Tel Afar "with the exception of a small heavily guarded area known as the Green Zone," as well as freeing "hundreds of prisoners."

The claim was made public on a Twitter account used by the al-Qaeda splinter group for updates on its operations in northern Nineveh
province.

ISIS seized the provincial capital, Mosul - Iraq's second-largest city - on Tuesday after several days of clashes, with Iraqi troops reportedly changing out of their uniforms and joining fleeing civilians.

Neighboring Jordan, meanwhile, doubled its security forces on the 180-kilometer border it shares with Iraq after reports that Iraqi units had withdrawn from areas in neighbouring al-Anbar province, military sources told dpa.

The phone call on Saturday came amid reports that Iran is considering military aid to Iraq's Shia-dominated government, and that Washington is mulling direct talks with Tehran regarding the unrest.

The British Foreign Office refused to give further details, but Hague was expected to make a statement to parliament on events in Iraq
later on Monday.

Earlier, Hague repeated his assertion that Britain was not planning any military intervention in the Middle Eastern country, telling the BBC that "the US is more likely to have the assets and capability for any outside intervention than the UK."

The BBC quoted a US official as saying that the United States would consider holding direct talks on Iraq with arch-rival Iran - al-Maliki's closest regional ally.

Despite reports of further setbacks in the north, Iraqi government forces claimed to have inflicted heavy losses on ISIS closer to
Baghdad.

Some 23 of the extremist group's fighters have been killed north of Baquba, 60 kilometres north-west of the capital, security officials
told dpa.

An unnamed security official in al-Anbar, where ISIS has held territories since January, told Alsumaria News that troops had
retaken two areas near the Syrian border, killing some 200 militants.

The report could not be independently verified.

"We have regained the initiative and the reins [of the situation] and we will advance upon them with you," the Shiite leader told a crowd of volunteers in the town of al-Mahmudiya south of the capital, Alsumaria News reported.

Al-Maliki last week called on citizens to join the fight against ISIS, a call that was repeated by the country's highest Shiite religious authority, Ayatollah Ali al-Sistani.

Police special forces backed up by engineering and logistics units had moved from the majority-Shiite southern province of Babil to the
city of Samara, near the frontline, local police chief Riyah al-Khiqani told Alsumaria News.

Samara is a majority-Sunni city but the site of one of Shiite Islam's holiest shrines, an attack on which led to severe sectarian violence
in 2006.

The meeting should lead to the early formation of a "national government aiming for complete national reconciliation and excluding no community," Waqf president Mahmoud al-Sumaidai said in commentsreported by Alsumaria.

Al-Maliki's State of Law Coalition came first in parliamentary elections held in April, gaining 92 of 338 seats and putting the outgoing premier in pole position to head a new government. The new parliament has yet to meet.

The rapid advance of ISIS and other fighters from Iraq's Sunni minority - who complain of discrimination at the hands of al-Maliki's Shiite-led government - has caused international concern.