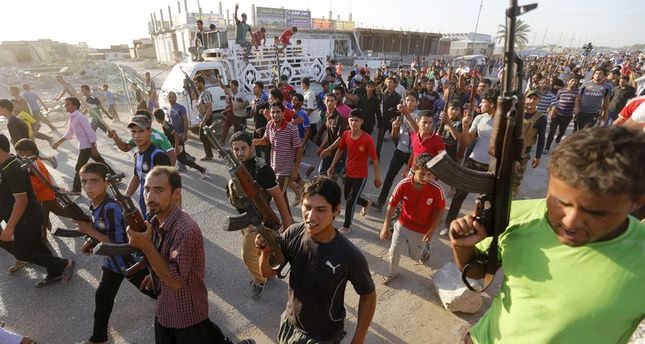 Baghdad — Militants led by the group Islamic State of Iraq and the Levant (ISIS) took complete control of northwestern Iraqi district Tal Afar on Monday, according to a security source.

Hundreds of families fled the city in the northern province of Ninawa after clashes between militants and security forces backed by Turkmen tribal fighters on Sunday.

In the last 24 hours eight Iraqi soldiers have been killed and a number captured in the eastern province of Diyala, which borders Iran. A tribal source said an armed group, with the backing of armed tribesmen, had clashed with the soldiers and seized the areas of Muqdadiyah, Jalula and Saadia in the province's north.

On Sunday, 10 civilians were killed and 40 injured in a mortar attack believed to have been carried out by ISIS militants, according to a medical source.

Turkmen tribesmen, who constitute the majority in the city, formed vigilante groups after ISIS-led forces seized the provincial capital, Mosul.

A tribal source indicated that 8,000 Turkmen fighters joined the Iraqi army's ranks on Friday to fight ISIS militants. The source, who spoke on condition of anonymity, told Anadolu Agency (AA), "Youths from the tribes are doing joint patrols with Iraqi security forces inside and outside the city of Tal Afar to counter any possible attack from ISIS."

Iraqi Prime Minister Nouri al-Maliki said on Sunday that Iraqi forces had regained "the initiative and began to crawl against ISIS forces." He was speaking to a crowd of volunteer fighters in Baghdad's southern district Mahmudiya.

"Some political failures in Iraq and other states are supporting ISIS group," said Maliki. Addressing the volunteers, he said "your mission does not end by purging ISIS militants and pro-ISIS politicians, your mission is the formation of the Iraqi army."

Earlier on Sunday, Iraqi national security adviser Faleh Alfayadh announced that Al-Maliki had ordered the creation of a system for recruiting civilians to fight against radical militants who have seized control of northern parts of the country.

Alfayadh said the Directorate for Civilian Recruitment would arm volunteers for "jihad against terrorism" and denied reports that Iranian "Quds forces" - a special unit of the elite Iranian Revolutionary Guard - had entered the country to support Iraqi security forces.

Seven people were killed and 24 injured in four separate blasts in Iraqi capital Baghdad on Sunday, according to Iraqi security officials. Earlier, twelve people had been killed and 29 injured in a suicide bomb blast in central Baghdad.

Baghdad has recently been hit by a series of violence, including car bombs and improvised explosives, resulting in the death and injury of dozens of citizens and members of security forces.

The attack came as Iraq continues to suffer from increased sectarian violence between Sunni and Shia Muslims, which the Iraqi government has blamed on ISIS.

ISIS, which developed into a formidable force inside Syria, extended its reach into Iraq after gaining near-complete control of the northern Iraqi city of Tikrit and seizing Mosul, Iraq's second-largest city on Tuesday. The group seized large swathes of western Iraq's Anbar Province in January, including much of Fallujah and parts of Ramadi, flashpoints of the US-led war in 2003.