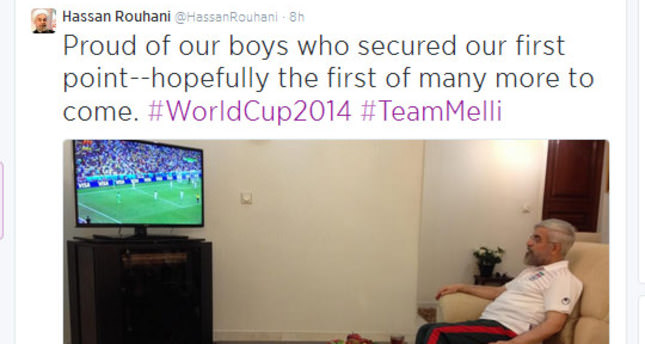 In a photograph shared via his official Twitter account on early Tuesday, Iranian President Hassan Rouhani is seen wearing and Iranian national team jersey and watching Iran playing against Nigeria in Group F of the 2014.

"Proud of our boys who secured our first point--hopefully the first of many more to come," Rouhani said in his tweet.

Nigeria and Iran delivered the first draw of the World Cup on Monday as they ground out a scrappy 0-0 stalemate in their opening match in Group F.

The draw at the Arena da Baixada in the southern Brazilian city of Curitiba followed 12 mostly high scoring and attacking games.

After a first half in which Nigeria failed to capitalize on its dominance, chances were few and far between in the second.

Iran coach Carlos Queiroz said the result was "fair" and that his players deserved "sympathy and respect" for performing on the biggest stage despite the impact of economic sanctions on the country which made it difficult to arrange friendlies.

The draw means the winless World Cup runs of both teams continues, dating back to France 1998. For Iran, though, this was the first time it had not conceded a goal at the World Cup finals.