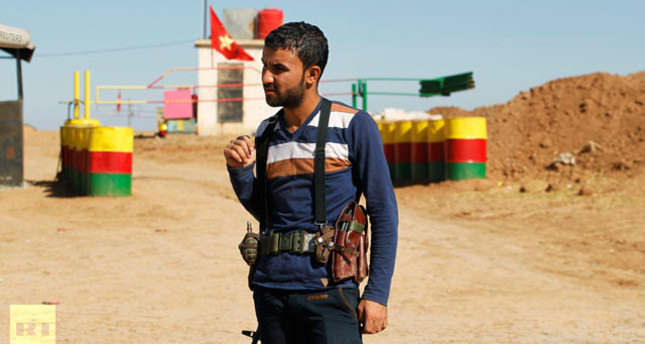 by Daily Sabah Jun 20, 2014 12:00 am
In a 107-page report prepared by Human Rights Watch (HRW), the New York-based advocacy group focused on Kurdish authorities running three enclaves in northern Syria since the withdrawal of forces loyal to Syrian President Bashar Assad "committing arbitrary arrests, due process violations, and failing to address unsolved killings and disappearances." According to HRW, the Democratic Union Party (PYD) _ an offshoot of the terrorist group PKK _ has effectively ruled the three predominantly-Kurdish enclaves since Syrian government forces withdrew from the areas in 2012, running a local administration with courts, prisons, and police.

The report titled, "Under Kurdish Rule: Abuses in PYD-Run Enclaves of Syria," documents arbitrary arrests of the PYD's political opponents, abuse in detention, and unsolved abductions and murders. It also documents the use of children in the PYD's police force and armed wing, the People's Protection Units (YPG). Human Rights Watch said it documented several cases in which the PYD-run police, known as the Asayish, appear to have arrested members of Kurdish opposition parties due to their political activity.

It added that in some cases, Kurdish opposition members have been convicted in apparently unfair trials, usually for alleged involvement in a bomb attack. "People detained for common crimes said they had been arrested without a warrant, were denied access to a lawyer and were held for long periods in detention before seeing a judge. At least nine political opponents of the PYD have been killed or disappeared over the past two and half years in areas the party partially or fully controlled," the report said. In its official website, the HRW recommended the PYD to open an independent review of alleged political prisoner cases, free anyone detained arbitrarily, and investigate unsolved disappearances and killings of opponents. It added that the PYD should also, "establish a clear mechanism for detainees to report abuse and decommission anyone under 18 from security forces and stop recruiting children."
RELATED TOPICS