US Secretary of State Kerry arrives in Cairo for brief visit 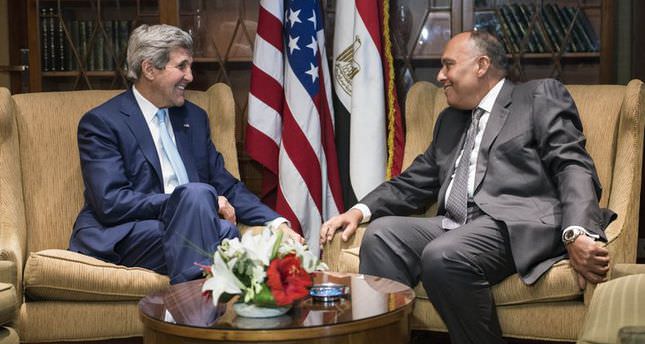 by AA Jun 22, 2014 12:00 am
U.S. Secretary of State John Kerry arrived in Cairo on Sunday for a brief visit to "congratulate" President Abdel-Fatah al-Sisi who was announced the winner of a late May election, a diplomatic source said.

"Kerry will also sit down with his Egyptian counterpart [newly-appointed] Sameh Shoukri to discuss a number of issues including the situation in Iraq and the Gulf area as well as Syria and Palestine," the source told Anadolu Agency.

On Friday, U.S. State Department Spokeswoman Jen Psaki said that "Kerry will travel from June 22-27 to the Middle East and Europe to consult with partners and allies on how we can support security, stability, and the formation of an inclusive government in Iraq, to discuss Middle East security challenges, and to attend the NATO Foreign Ministerial."

Egypt was not mentioned in Psaki's announced itinerary of Kerry's tour, which includes Amman.

Another diplomatic source has told AA earlier that Kerry will assure al-Sisi that the U.S. will take part in an upcoming donors' conference organized by Saudi Arabia.

The source, requesting anonymity, said Kerry deliberately scheduled his visit to Cairo one day after a visit by Saudi King Abdullah bin Abdulaziz, who had called for the donors' conference.

Kerry will also discuss with al-Sisi a bill proposed before the U.S. Congress to reduce Egypt's annual aid package by $400 million pending progress on democracy and human rights issues.

U.S. President Barack Obama had phoned al-Sisi -the former army general who led the army last summer to oust elected president Mohamed Morsi-to congratulate him on winning in the late May president election.

Al-Sisi, who vied against leftist Hamdeen Sabahi, garnered nearly 97 percent of votes, according to figures by the electoral commission.

Egypt's relations with the U.S. deteriorated following Morsi's ouster, in which al-Sisi is widely believed to have played a key role.

Egypt had used to receive an annual $2.1 billion in aid from the U.S.-$1.3 billion in the form of military assistance-since the ratification of the 1979 U.S.-brokered peace treaty between Egypt and Israel.

Last October, however, Washington froze part of the annual aid package-including the sale of Apache gunships and other military equipment-pending the "democratic transition" pledged by Egypt's army-backed interim government in the wake of Morsi's ouster last July.