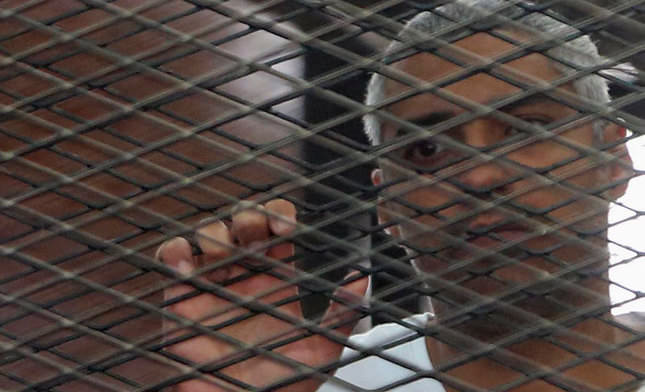 by Daily Sabah with Agencies Jun 23, 2014 12:00 am
In the trial of three Al Jazeera journalists on Monday, an Egyptian court handed seven years of imprisonment for each journalist.

The three were detained in late December and charged with helping a "terrorist organisation" by publishing lies that harmed the national interest and supplying money, equipment and information to 16 Egyptians.

Families waved to the defendantes and Greste and his brother Andrew gave each other the "thumbs up" sign.

Abdullah al-Shamy, an Al Jazeera colleague who had been detained but was recently released after hunger strike, was also there. "I'm certain of their innocence," he said.

All three have been held at Egypt's notorious Tora Prison for six months, in a case that has drawn criticism from Western governments and human rights groups.

Al Jazeera's Cairo offices have been closed since July 3 when security forces raided them hours after the army ousted Mursi following mass protests against his rule.

Western governments have voiced concern over freedom of expression and press freedom in Egypt since Mursi's ouster and the crackdown has raised questions about Egypt's democratic credentials three years after an uprising toppled Hosni Mubarak after 30 years in power and raised hopes of greater freedoms.