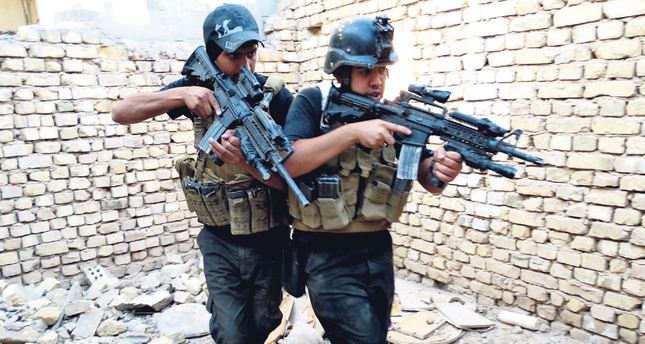 After taking the town of al-Qaim on the Syrian border, Rawah, Anah, Ratba and Haditha towns were also seized by radical, violent ISIS militants. In the city of Ramadi, fierce fighting between militants and the security forces reportedly continues. A local source who spoke to Anadolu Agency (AA) claimed that "the Iraqi army executed 30 prisoners by firing squad in Anbar province."

Meanwhile, Iraqi government forces in an effort to counter militants' attacks launched air strikes yesterday on the militant-controlled Iraqi city of Tikrit. During the heavy clashes yesterday, at least seven people were reportedly killed. As the government security forces tries to stop the militants' onslaught, eight militants were killed in the city of Tal Afar during the heavy clashes between Iraqi security forces and militants, according to a Turkmen tribal leader who spoke to AA.

As the heavy battle continued incessantly, after seizing Mosul and Tikrit to the north, militants have threatened to advance further south posing a considerable security threat to many Iraqis. Much of the territories seized by ISIS militants so far are in the north of the country. The capital city of Baghdad and southern Iraq are now faced with a serious security problem regarding the region. Having the largest oilfields and the main export pipeline in the south, ISIS's march toward Baghdad is of significance for the Iraqi government which heavily depends on oil revenue.

Iraq has tightened oilfield security and deployed more troops around oil infrastructure and oilfields to help protect Iraq's energy industry in the south, according to a Reuters Africa report on June 17. "We have doubled security measures to keep oilfield operations and companies 100 percent safe. Now we have more than 100,000 oil policemen on the ground on high alert, ready to protect energy facilities in the south," Brigadier Moussa Abdul-Hassan, chief of the South Oil Police spoke to Reuters.

The last attack on the oil refinery at Baiji, which provides oil for domestic consumption to 11 Iraqi provinces, including the capital city Baghdad, has caused the refinery to be shut down after a long siege. The refinery has the capacity to produce 310,000 barrels of oil a day. Apart from producing refined products, the facility also supplies electricity to much of northern Iraq with a 600-megawatt power plant. The seizure of the largest oil refinery is seen as an important source of revenue for ISIS militants however, Iraqi authorities have denied full control of the oil refinery to militants, stating that Iraqi forces are still in control.

Regarding militants invading the oil refinery, Baiji is considered of crucial importance and is the location where most oil pipelines and power stations were established. The loss of refinery also proves that the Iraqi government has lost an important source of fuel in its battle to end the ISIS onslaught. As ISIS militants have gained control of oil resources, there has been a growing concern over ISIS's continued operations while gaining more control on the ground. It can be noted that militants would likely profit from its control of oil resources, which leads presumably to splinter the country creating a secretarial rift due to a weakened Iraqi government.

Concerning the long bloody battles in Iraq, Iraq's oil has long been considered as a dominant goal for many Western countries, predominantly the United States and United Kingdom. The Global Policy Forum states in its archived section named "Iraq Conflict" that the U.S. and U.K. sought to gain control of oil in Iraq and to dominate the larger oilrich Gulf region. The early struggle of Iraq's oil goes back to imperial times when Britain had a significant interest over Iraqi oil. This also led to the never-ending Western conflict as many countries desired to play a dominant role in the exploitation of the Iraqi oil market. Due to continuing battles over Iraqi oil, the Iraqi energy industry was dubbed the "oil curse."

Iraq, the second-largest oil producer in OPEC, represents one of the largest sources of growth. Major oil field and facilities are founded in Basra, south of the country, leading many international oil traders worrying over the ongoing turmoil in crisis-stricken Iraq. According to the International Energy Agency (IEA) data on Iraqi oil in 2011, Iraq has the world's second-largest conventional oil reserves producing 132,176 tons of crude oil.
Due to growing insecurity in the country, the latest reports state that about 500,000 people have fled their homes in Mosul, now displaced as authorities have set up camps in nearby towns. After the militants' takeover of Mosul, Iraq's second biggest city, it was also reported that many families fled north from Mosul towards the nearby Kurdistan region, where the peshmergas provide security to the region.
RELATED TOPICS