Kurds warns Kerry of a 'new Iraq' in Arbil talks 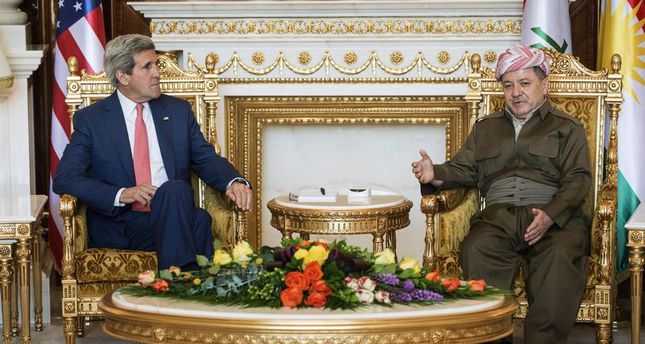 by reuters
Jun 24, 2014 12:00 am
US Secretary of State John Kerry made an unannounced visit to Iraq's autonomous Kurdish region Tuesday as he pressed an urgent diplomatic drive to stop the fractious country tearing apart.

"With these changes we are facing a new reality and a new Iraq," Kurdistan's president Massud Barzani told Kerry, referring to a ISIS militant assault which has swept through parts of northern and western Iraq.

Kerry arrived in Arbil a day after talks in Baghdad with Sunni leaders and Shiite Prime Minister Nuri al-Maliki.

He is the first US secretary of state to visit the Kurdish region since Condoleezza Rice in 2006, and the trip comes amid international concern over the militant offensive led by the ISIS.

Greeting Kerry in his presidential palace, Barzani told the US diplomat through a translator that the Kurds seek "a solution for the crisis that we have witnessed."

The militants has cleared the way for Iraqi Kurds -- who were once gassed by former dictator Saddam Hussein -- to also take control of a swathe of disputed territory they want to incorporate into their autonomous region over Baghdad's strong objections.

Crucially, their security forces are now responsible for securing the ethnically mixed oil-rich city of Kirkuk, the heart of that disputed territory.
"As everybody knows this is a very critical time for Iraq and the government formation challenge is the central challenge that we face," Kerry told Barzani.

Kurdish forces were "really critical in helping to draw a line with respect to ISIS," he added.

Barzani told CNN television ahead of Tuesday's talks that Maliki should step down as "the one responsible for what has happened."
"During the last 10 years we did everything in our ability... to build a new democratic Iraq, but unfortunately the experience has not been successful," he said.

Pressed on whether Iraqi Kurds would seek independence, Barzani told the US broadcaster: "The time is here for the Kurdistan people to determine their future and the decision of the people is what we are going to uphold."

"Iraq is obviously falling apart anyway, and it's obvious that a federal or central government has lost control over everything."

Iraqi forces are struggling to hold their ground in the face of the drive, which has seized major areas of five provinces.

In a new setback, the insurgents overran the strategic town of Tal Afar in northern Iraq. However, the security forces managed to retake a border crossing with Syria from the militants on Monday. "This is a critical moment for Iraq's future," Kerry said Monday after meeting Maliki in Baghdad.
"It is a moment of decision for Iraq's leaders, and it's a moment of great urgency. Iraq faces an existential threat, and Iraq's leaders have to meet that threat with the incredible urgency that it demands."

US officials acknowledged that the gains made by Kurds in recent weeks in the fighting might not be easily reversed.

At the same time, Washington is keen to persuade the various Iraqi factions to speed up the formation of a new government following April elections.

"The Kurds have a better role to play in maintaining the stability of the state here to some extent," a senior State Department official told reporters.
"If they decide to withdraw from the Baghdad political process, it will accelerate a lot of the negative trends," he warned.

But if the Kurds take an active role "they will have substantial clout and influence in Baghdad".

The region has also taken in thousands of people displaced by the militant offensive, and Kerry's visit aimed to recognise their efforts to tackle "a very serious refugee crisis".