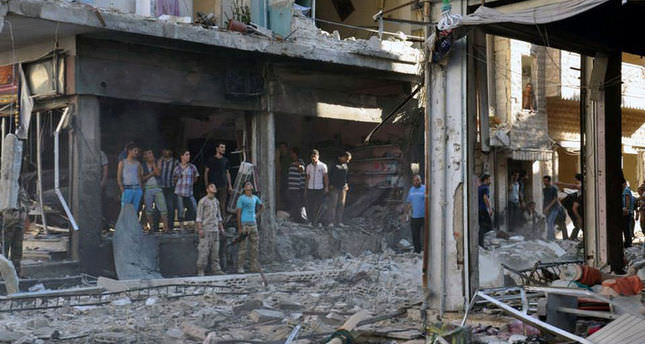 by AA Jun 25, 2014 12:00 am
At least 59 people, including five children, were killed during operations across Syria on Tuesday, allegedly by forces loyal to the regime of President Bashar al-Assad, according to opposition activists.

Air and land operations involving heavy weaponry and barrel bombs killed 19 people in the suburbs of the capital, Damascus, 16 people in Aleppo, six each in Homs and Deiruz Zor, four each in Hama and Idlib, two in Daraa, and one each in Ar-Raqqah and Latakia, according to the London-based Syrian Network for Human Rights, which tracks civilian and opposition casualties.

According to the Syrian Local Coordination Committee, numerous houses were demolished or damaged as army helicopters dropped barrel bombs on areas under opposition control in Aleppo, Hama and Idlib.

Barrel bombs, which are filled with high-explosives, oil and shrapnel, are often dropped from Syrian army helicopters.