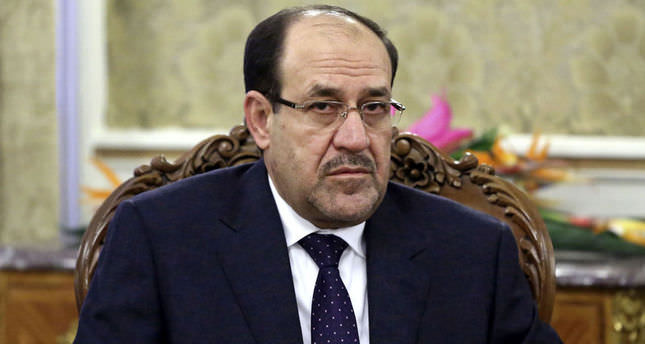 by AA Jun 25, 2014 12:00 am
Answering calls for the emergency formation of an interim unity government in Iraq would be a blow to the country's constitution and political process, Iraq's Prime Minister Nouri al-Maliki said.

In his weekly address to the nation on Wednesday, Maliki said Iraq's parliament would convene soon and would accelerate the formation of a new government.

"The terror attacks committed in the country indicate that Iraq's territorial integrity is at risk," Maliki said, referring to an increasingly threatening insurgency spearheaded by the militants of the group Islamic State of Iraq and the Levant.

ISIS militants, backed by tribal fighters, seized Iraq's second-largest city Mosul on June 10 and have captured a number of other towns in the north including Tikrit and Tal Afar. They also hold control of Al Qaim, Rawah, Anah, Ratba and Haditha in the western province of Anbar.

"We have recaptured a lot of areas," Maliki said, attributing this success to the efforts of Shia clerics, who had called on their followers to take up arms and defend Iraq against the ISIS militants who want to displace Iraq's Shia government.

Maliki has lashed out at Kurdish governors, and in particular, Nechirvan Barzani, Prime Minister of the Kurdistan Regional Government, accusing them of supporting the militants. Without naming anyone in particular, Maliki referred to comments made by Barzani about a "post-Mosul" Iraq in a BBC interview on June 17.

"Some talk of a pre-Mosul and post-Mosul Iraq. These people are collaborating with the ISIS. They are allies. Those who see themselves as a part of Iraq now claim that the U.S. should not help the Iraqi army. We have not witnessed them being concerned with Iraq's problems, or seeing themselves as a partner of this country at all. They act as if they are not the peoples of Iraq," Maliki said.

Rejecting claims that he is solely responsible for the current crisis, Maliki said that all Iraqi parties should stand united, and abide by the Constitution.

"The war that Iraq is faced with necessitates acting together," he said, reiterating the sentiments of Yusuf al-Qaradawi, President of the International Union of Muslim Scholars, who warned against the danger of sectarian strife in Iraq, and underlined the necessity of unity against sectarianism.

"Only dialogue could solve Iraq's crisis. Iraq had always Sunnis and Shia, and we ask them to work together in this war, without mentioning sects," Qaradawi told a news conference in the Qatari capital Doha on Monday.