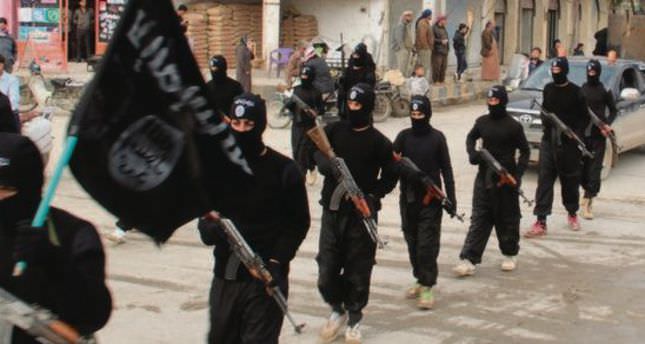 by Associated Press Jun 26, 2014 12:00 am
A group of fighters from al-Qaeda's Syrian affiliate in a border town has defected and joined the rival Islamic State of Iraq and Sham, the powerful jihadi faction currently leading a blitz offensive in Iraq, an activist group said Wednesday.

The move opens the way for ISIS, which formally broke with al-Qaeda earlier this year, to take control of both sides of the Syria-Iraq border and a huge chunk of territory straddling the two countries.

The Britain-based Syrian Observatory for Human Rights said senior members of the al-Qaeda-linked Nusra Front based in the Syrian border town of Boukamal traveled to the Iraqi frontier town of Rabia Sunday, where they pledged loyalty to ISIS.

The two rebel factions have been engaged in deadly infighting across opposition-held territory in northern Syria for months. Thousands of people have been killed on both sides of the fight, which has undermined their larger goal of toppling President Bashar Assad.

Al-Qaeda's central leadership broke with the Islamic State of the Iraq and Sham earlier this year, in part because of its brutality and refusal to heed calls to stem the infighting. Al-Qaeda leader Ayman al-Zawahri then reaffirmed that Nusra Front as al-Qaeda's branch in Syria.

But the ISIS has in recent days succeeded in grabbing vast swaths of territory along the Iraqi-Syrian border, including two border crossings. The group also controls much of of eastern Syria including large parts of Deir el-Zour province, where Boukamal is located. The town is controlled by increasingly besieged Nusra Front fighters and a host of other Islamic rebel groups with dwindling resources.


The Observatory report, also published by some militant websites Wednesday, could not be independently confirmed and calls to Boukamal were not going through.

"This means that the ISIS is now effective in Boukamal," said Rami Abdul-Rahman, director of the Britain-based group.

He said the move reflected the "growing strength of the ISIS." He said there were expectations that the group would now enter Boukamal from the Iraqi side of the border at the Qaim crossing, effectively taking control of the huge border area between Syria and Iraq. ISIS fighters seized the Iraqi town of Qaim and the border crossing by the same name over the weekend.

Despite the loyalty pledge, which appears to be confined to the specific circumstances of Boukamal, fighting between the Nusra Front and ISIS fighters continued in other parts of Syria Wednesday, including around Nusra's stronghold of Shehil in Deir el-Zour province.

Meanwhile, Syrian government warplanes struck a series of targets in Syria's northern city of Raqqa, an ISIS stronghold, killing at least 12 people, opposition activists said. The airstrikes on Raqqa appear to be part of an intensified Syrian government campaign against the militant faction.

Activists said the jets struck targets around the provincial capital of Raqqa, including a market and the headquarters of the ISIS.

A Raqqa-based activist who goes by the name of Abu Noor said in an interview over Skype that 13 bodies of civilians have been identified. He said the death toll will likely rise due to a large number of wounded.

An array of Syrian rebel groups captured Raqqa in March 2013. The ISIS eventually expelled the other factions and took full control of the city, which is the only provincial capital to fall out of government hands.

Also Wednesday, Syrian aircraft carried out a series of airstrikes in the eastern, oil-rich province of Deir el-Zour near the border with Iraq. ISIS fighters have been battling rival rebel groups for months in the oil-rich province. There were no immediate reports of casualties.

In Deir el-Zour, at least two airstrikes struck Muhassan, a town along the Euphrates River near Iraq that has been daily pounded by warplanes since the ISIS fighters captured it last week.

Both Al-Nusra and ISIS are listed as terrorist organizations in Turkey.