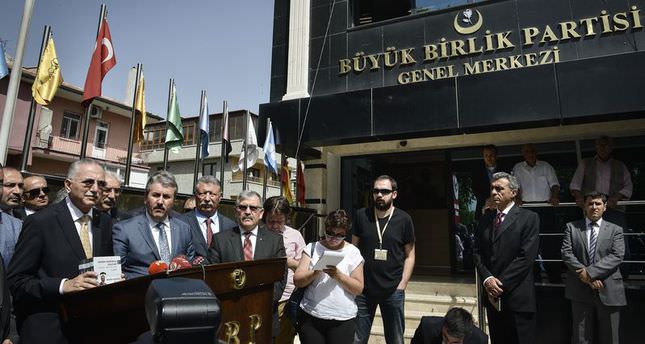 by Daily Sabah Jun 26, 2014 12:00 am
Ekmeleddin İhsanoğlu, the Republican People's Party (CHP) and the Nationalist Movement Party's (MHP) joint candidate for the upcoming presidential elections which will be held in less than 40 days has started to visit political parties to garner support. On Thursday, İhsanoğlu visited the Great Union Party (BBP) and the Democratic Left Party (DSP), CHP and expressed the meetings went well and were constructive.

Commenting about his meeting with Mustafa Destici, the leader of BBP, İhsanoğlu expressed he was extremely happy as it was an extremely productive meeting. He noted that he personally knew the former leader of the party, late Muhsin Yazıcıoğlu and has always applauded his political ethics while stating Destici followed Yazıcıoğlu's path with his honesty and loyalty to the nation. İhsanoğlu reported that Destici welcomed his visit and hoped that the BBP will support him in the presidential elections. Likewise, Destici stated that the BBP will announce their decision next week after a series of discussions and evaluations which will be made by the party.

İhsanoğlu went to DSP's headquarters following his visit to BBP and met with Masum Türker, the leader of DSP. Here he expressed that the meeting was conducted in a positive atmosphere and stated they discussed numerous issues regarding the presidential elections. The joint candidate remarked that he was hopeful and expressed his gratitude to DSP. Türker also stated that they will discuss and evaluate the candidates as a party and will share their final decision with the press.

On the other hand, Kemal Kılıçdaroğlu, the leader of CHP praised İhsanoğlu for "tolerant character" and stated İhsanoğlu's most important feature was that he embraces all segments of the society. Admitting the claims that İhsanoğlu is an apolitical figure, Kılıçdaroğlu stated he closely follows global issues and does not make negative remarks for anyone in the society. Likewise, İhsanoğlu praised the reconciliation between CHP and MHP and claimed it was based on solid grounds which will pave the way for Turkey to weather the crises. İhsanoğlu also claimed he does not have a secret agenda and expressed he will continue to promote his presidential campaign in the upcoming days.

Numerous polls have recently revealed that İhsanoğlu would receive only around 35 percent of the votes while Recep Tayyip Erdoğan could receive up to 54 percent.