Kerry arrives in Saudi for Iraq and Syria talks 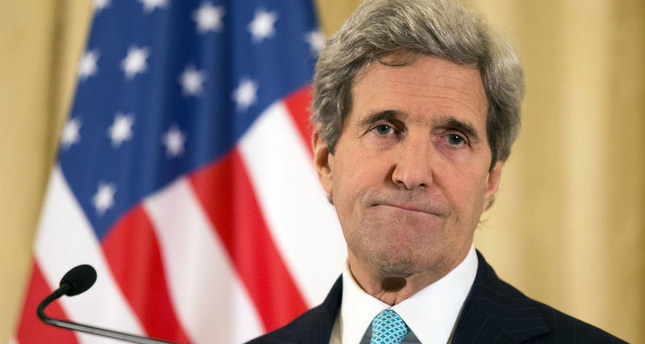 by Jun 27, 2014 12:00 am
US Secretary of State John Kerry arrived in Jeddah on Friday to discuss the crises in Iraq and Syria with Saudi Arabia's King Abdullah and meet Syrian opposition leader Ahmad Jarba, who has close ties to the kingdom.

The Obama administration on Thursday asked for $500 million from Congress to train and equip vetted members of Syria's opposition, the most significant move so far by the United States to support those fighting against President Bashar al-Assad.

Saudi Arabia has been the most prominent backer of the Syrian rebels, and was very critical of Washington last year when it backed away from air strikes against Assad after a poison gas attack in Damascus.

The talks with the Saudis are part of diplomatic efforts by the United States to press regional leaders to tackle the threat by extremist militants in both conflicts. On Thursday King Abdullah ordered "all measures" to be taken to protect Saudi Arabia against militants.

Washington has placed its hopes in forming a new, more inclusive government in Baghdad that would undermine the insurgency led by the self-proclaimed Islamic State in Iraq and Sham(ISIS), which has seized towns and cities this month.

Maliki, a Shi'ite Muslim, is a close ally of Sunni Saudi Arabia's main regional foe Iran, and is fighting to stay in power after coming under criticism over the ISIS-led advance.

Baghdad is racing against time as the insurgents consolidate their grip on predominantly Sunni provinces.

On Thursday, Kerry met with foreign ministers from Saudi Arabia, Jordan and United Arab Emirates to inform them of plans for air strikes against ISIS once a new government is formed.

The United States also wants these countries to do more to cut off the flow of funding from private donors to ISIS.