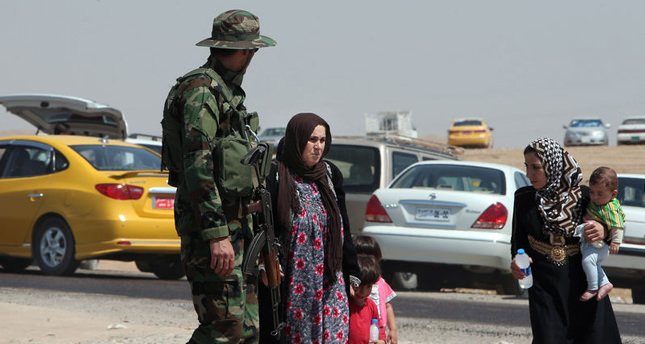 by AA Jun 29, 2014 12:00 am
Thousands of Iraqis are fleeing their country for Turkey as violence continues to grow following the advance of ISIS militants.

A total of 40 flights have been launched by Turkish Airlines from five Iraqi cities, said Abdulkerim Torun, the carrier's regional manager in Sulaymaniyah - the first stop for many Iraqis in the Kurdish Regional Government region after they flee the violent provinces of Salahuddin, Diyala and Anbar.

"We are carrying an average of 1,000 passengers daily from Iraq to Turkey," he told AA on Sunday.

"At first, most of our passengers were Turks returning to their homeland due to safety reasons. But now the majority are Iraqis who are evacuating their country," he said.

In Sulaymaniyah, the Iraqis get on buses, with most leaving behind their lives in the hope of finding peace in Turkey.

The Kurdish Regional Government issues only one-day visas to newcomers, due to the high level of unemployment caused by the clashes between government forces and ISIS and tribal militants, KRG officials say.

Twenty buses a day are travelling along the Sulaymaniyah - Irbil - Istanbul route and the number of passengers is increasing, said Turkish bus company worker Ali Abdurahman.

"They flee to live in better conditions and seek asylum with the help of the United Nations," he said.

According to Abdurahman, at least 200 Iraqis a day buy bus tickets in order to escape and find a better life.

"We are leaving for Turkey to save our lives and rescue our children," one man told AA. "If we are able to find work there, we will think of staying permanently. We will also ask the UN for help to find asylum, if needed."

Backed by tribal fighters, militants led by self-claimed Islamic State of Iraq and al Sham (ISIS), seized Iraq's second-largest city Mosul on 10 June and later captured a number of other towns in the north including Tikrit and Tal Afar.

They also hold control of Al Qaim, Rawah, Anah, Ratba and Haditha in the western province of Anbar.