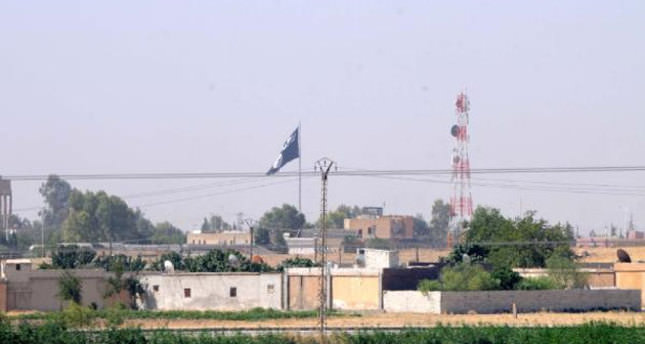 by Daily Sabah Jun 30, 2014 12:00 am
IslamIc State of Iraq and al-Sham (ISIS) militants declared that they had founded a new country called the Islamic State and that their leader, the secretive Abu Bakr al-Baghdadi, will be the new caliph of the Islamic world. The group also raised its flag across the border from the Turkish town of Akçakale.

Radical Islamic State of Iraq and al-Sham (ISIS) militants, spearheading a fierce onslaught in Iraq and Syria have announced the establishment of an Islamic state, a state governed by Shariah law which stretches from northern Syria to the Iraqi province of Diyala northeast of Baghdad, while calling on all Muslims to pledge allegiance to their shadowy front man, Abu Bakr al-Baghdadi.

They also announced that the organization was changing its name to just Islamic State (IS). In an audio recording posted on the Internet, the press secretary of ISIS Abu Mohammed al-Adnani states that the Council of ISIS has appointed their leader as the "caliph of all Muslims," according to Al-Arabiya, a Saudi owned news channel reported. "He is the imam and caliph for Muslims everywhere," said al-Adnani in his online statement.

The reports states that the militants also declared a holiday in the town of Raqqa, a city in north central Syria which is controlled by the militants. This proves that ISIS militants are challenging Al-Qaeda for control of the global jihadist movement and would become a significant threat deteriorating regional and global peace and stability. "This declaration is a message by Islamic State not only to Iraq or Syria but to the region and the world. The message is that Islamic State has become a threat to all countries,"

Iraqi army spokesman Qassim Atta told Reuters yesterday. "I believe all the countries, once they read the declaration will change their attitudes because it orders everybody to be loyal to it," he also added.

Meanwhile, heavy clashes are occurring to oust ISIS militants from both Iraq and Syria. The Iraqi army was attempting to push back against ISIS with the support of tribal fighters in order to recapture the northern territories under the control of the militants. The Iraqi military has launched military operations to wrest back the northern city of Tikrit since last Saturday with a multi-pronged assault spearheaded by ground troops backed by tanks and helicopters. After weeks of demoralizing defeats, Iraqi government forces have been able to make progress in Tikrit, the hometown of Saddam Hussein. Following the arrival of five Russian Sukhoi warplanes, the first batch of Sukhoi Su-25 jets to Iraq to aid in the battle with militants, the planes pounded the northern city of Tikrit with air strikes which led to fierce clashes breaking out across the city yesterday, according to reports. Iraqi forces' latest military operation to regain control of the city of Tikrit shows that the Iraqi army has carried out "the most ambitious" operation since violent fighting broke out earlier this month.

In addition to fierce fighting in Tikrit, Iraqi forces reportedly launched a military operation in the town of Baiji, one of the battlegrounds of Iraqi forces and ISIS militants. As government forces and ISIS fighters have been engaged in heavy clashes vying to take control of Iraq's biggest oil refinery, the reports stated that six civilians were killed and 13 injured yesterday when Iraqi helicopters fired at areas near the town of Baiji.;

Aside from an Iraqi army offensive to retake Tikrit, ISIS militants have also battled Syrian rebels, Kurdish militias and the Syrian regime forces. According to Anadolu Agency, peshmerga forces and ISIS militants have battled in the northeastern city of Diyala, as the Iraqi army has lost its control over the northern region. Peshmerga forces have become the sole guarantor of security in the region since the fierce fighting broke out earlier this month.

Considering ISIS militants' violent onslaught in Iraq and Syria threatening regional stability, the United States also underscored the importance of Iraq's territorial integrity. "We have said that a unified Iraq is the strongest Iraq, and have said that an inclusive government that includes Sunni, Shia, and Kurds needs to be formed as soon as possible to help deal with this crisis." The U.S. deputy State Department spokeswoman, Marie Harf stated on June 27. As violent militant attacks splinter the country into sectarian lines, the U.S announced that it is in the country's best interests to remain united. In addition, "a united Iraq is a stronger Iraq, and our policy is to respect the territorial integrity of Iraq as a whole," said State Secretary John Kerry speaking to the American news network NBC last week.

ISIS militants seized Iraq's second-largest city, Mosul, on June 10 and later captured a number of other towns in the north including Tikrit and Tal Afar. They also control Al Qaim, Rawah, Anah, Ratba and Haditha in the western province of Anbar. According to reports, thousands of people have fled their homes in the captured cities and moved on as authorities have set up camps in nearby towns.
Last Update: Jul 02, 2014 2:38 am
RELATED TOPICS