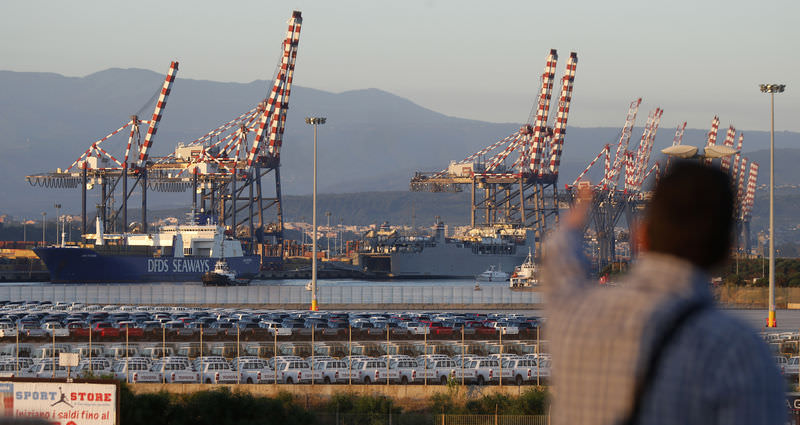 by Associated Press Jul 02, 2014 12:00 am
Cargo containers carrying hundreds of tons of Syrian chemical weapons were loaded onto a U.S. cargo ship Wednesday for destruction at sea, one of the final phases of the international effort to rid Syria of its chemical weapon stockpile.

The chemicals had crossed the Mediterranean aboard the Danish ship Ark Futura, which steamed into the southern Italian port of Gioia Tauro as the sun rose Wednesday.

Waiting there was the U.S. cargo vessel MV Cape Ray, which arrived a day earlier and has equipment on board to neutralize the chemicals.

By midday, about a third of the 78 containers had been transferred from the Ark Futura to the Cape Ray, officials said.

Italy's environment minister, Gian Luca Galletti, proclaimed the mission a proud moment for Italy, tweeting that the country was contributing to international security in a "transparent and environmentally secure operation."

The operation, however, has hardly been transparent for local residents, who complained that they were kept in the dark about what would happen and what chemicals were going to be transferred in their port.

Once all the chemicals including mustard gas and the raw materials for sarin nerve gas are transferred onto the Cape Ray, the U.S. vessel will sail into the open sea and begin the process of neutralizing the materials.

The Cape Ray's cargo hold is outfitted with two machines called Field Deployable Hydrolysis Systems. They consist of mazes of tanks, tubes, cables and electronics that will mix the Syrian chemicals with heated water and other chemicals in a titanium reactor to render them inert.

The resulting waste will then be disposed of on land in dumps equipped to handle hazardous materials.

U.S. officials say no vapor or water runoff will be released into the atmosphere or the sea as a result of the process.