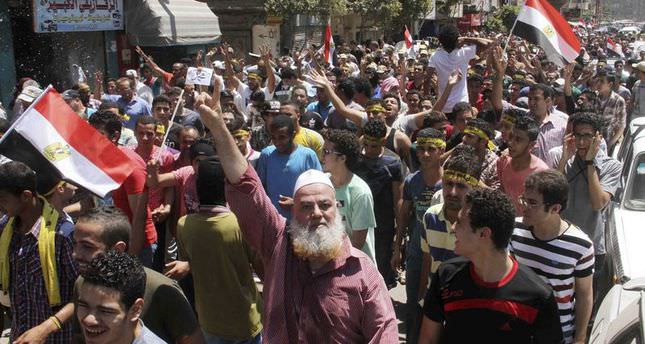 by AA Jul 04, 2014 12:00 am
Egypt's Interior Ministry said Thursday its security forces arrested 196 supporters of ousted president Mohamed Morsi on the first anniversary of the latter's ouster by the military.

Thirty-nine Muslim Brotherhood members, described by authorities as "wanted," were arrested on Thursday in what the Interior Ministry called "preemptive strikes" before they could carry out any sabotage plans.

In a statement, the ministry said it had arrested the Brotherhood members in light of plans by the group to stage protests on the first anniversary of the military overthrow of Morsi, a Brotherhood leader.

"Security agencies managed to arrest 39 wanted persons in eight provinces," the ministry added in the statement.

The Brotherhood and Morsi supporters staged a series of protests on Thursday to mark the first anniversary of his ouster.

One man was killed and several others injured in clashes between police and protesters.

The Interior Ministry said in its statement that police had managed to disperse Muslim Brotherhood protesters in a number of provinces.

It added that police had also arrested 157 protesters in nine provinces, including capital Cairo.

This brings the number of Brotherhood members arrested on Thursday to a total of 196.

The Brotherhood has been staging unrelenting protests since Morsi's ouster by the military in July of last year.