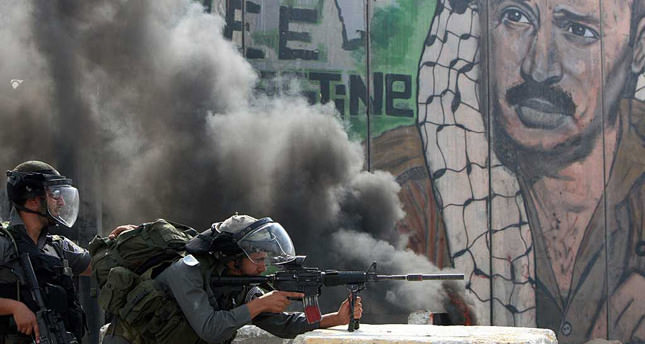 "Egyptian intelligence has contacted Hamas leader Moussa Abu Marzouk to reach a truce agreement entailing the halt of rocket fire at Israel by Gaza-based groups in exchange for a halt of Israeli airstrikes," the source told Anadolu Agency, adding that the agreement had gone into effect last night.

"Hamas still believes the Israelis might be using the truce as a decoy while they plot wide-scale aggression on Gaza," he said.

Hamas' military wing the Ezzeddin al-Qassam Brigades, for its part, said it was unfazed by Israeli threats.

"It only pushes us to prepare for zero-hour," the group said at a press conference on Thursday evening.

The Gaza Strip-besieged by Israeli since 2007-and adjacent southern Israeli towns have seen relative calm since Thursday night after Israeli forces launched a series of airstrikes on Gaza and a mass arrest campaign in the West Bank.

The stepped-up violence, which has left at least ten Palestinians dead, comes following the alleged kidnapping of three Jewish settlers in a West Bank settlement in June, for which Israel accused Hamas.

Hamas, for its part, has repeatedly dismissed Israel's accusations, which have not been accompanied by any evidence.

Israeli airstrikes on Gaza intensified over the past several days after Israel announced that the three settlers had been found dead near the West Bank city of Hebron.

No Palestinian group has claimed responsibility for either the settler's alleged kidnapping and murder or the rocket fire from Gaza.

Egypt, which shares a border with both the Gaza Strip and Israel, has been a traditional mediator between Israel and the Palestinians, as well as between rival Palestinian factions.

However, Cairo's alleged mediation efforts this week comes despite a campaign by Egypt's military-backed authorities against Hamas, an offshoot of Egypt's Muslim Brotherhood.

Egypt's anti-Hamas campaign has come in the wake of last summer's military ouster of elected president Mohamed Morsi, who hails from the decades-old Brotherhood.

Earlier this year, an Egyptian court banned the activities of Hamas inside Egypt and ordered its offices confiscated.