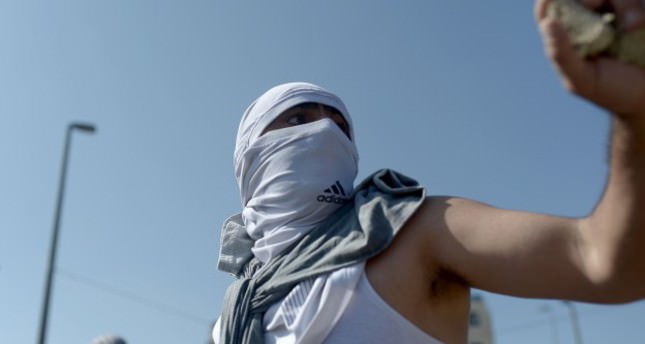 by AA Jul 05, 2014 12:00 am
Dozens of Palestinians were injured, including six with live ammunition, during overnight clashes with Israeli forces in the West Bank, medical sources and eyewitnesses said on Saturday.

The clashes erupted when a group of angry Palestinian youth blocked with burning tyres and rocks the roads leading to the northern Qalandia checkpoint, a gateway to East Jerusalem, to protest the killing of a 16-year-old Palestinian boy who is widely suspected to have been abducted and murdered by Jewish settlers.

Israeli forces fired live ammunition, birdshot and teargas to disperse Palestinian protesters, who hurled stones and petrol bombs at Israeli forces stationed near the checkpoint, according to eyewitnesses.

"Dozens of Palestinian protesters suffered teargas inhalations and were mostly treated on the field," an eyewitness said.

The confrontations came hours after thousands of Palestinians took part in a massive funeral in East Jerusalem to bid farewell to Mohamed Hussein Abu Khdeer, whose charred body was found on Wednesday in a forest near Jerusalem.

The boy's death followed the discovery of the bodies of three Israeli settlers who had gone missing from a West Bank settlement some three weeks earlier.

Israel accused the Gaza-bases Hamas movement of kidnapping and murdering the trio, though Israel produced no evidence to prove the claim, which Hamas has repeatedly spurned.

Footage taken from a security camera near Abu Khdeer's Jerusalem home showed what appeared to be Jewish settlers abducting the boy. In the footage, the kidnappers can be seen forcing him into their car before speeding off.

Since the settlers' disappearance, Israeli forces have launched a wide-scale arrest campaign in the West Bank, detaining over 500 Palestinians, including lawmakers and former government officials - as well as a barrage of airstrikes on the besieged Gaza Strip.