Jewish suspects arrested over the death of Palestinian teen 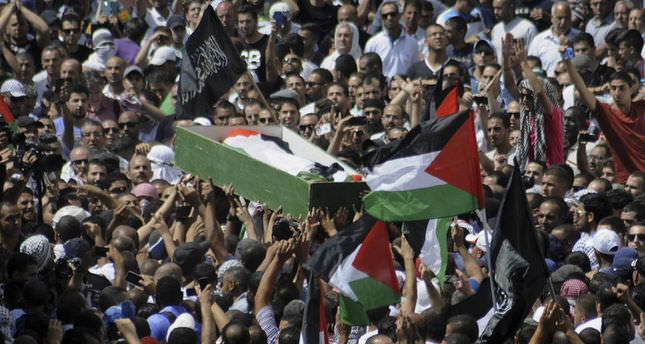 by Associated Press Jul 06, 2014 12:00 am
Israeli authorities have arrested a number of Jewish suspects in the killing of a Palestinian teenager whose death set off days of violent protests in Arab areas of Jerusalem and northern Israel, an official said Sunday.

Mohammed Abu Khdeir, 16, was abducted last week and his charred body found a short while later in a Jerusalem forest in what Palestinians say was a revenge killing for the earlier deaths of three Israeli teens.

Police have been investigating various avenues in the teen's death, including criminal or personal motives. But the official, speaking on condition of anonymity because the investigation was continuing, said authorities believe the killing was "nationalistic" in nature.

In east Jerusalem, home to the most violent protests over the teen's death, Abu Khdeir's mother, Suha, welcomed news of the arrests but said she had little faith in the Israeli justice system.

"I don't have any peace in my heart. Even if they captured who they say killed my son," she said. "They're only going to ask them questions and then release them. What's the point?"

President Shimon Peres said Sunday that Israel would get to the bottom of Abu Khdeir's killing and bring whoever is responsible to justice.

"If Jews are becoming killers, they will be put to court like any killer," he told a gathering of foreign journalists in the southern town Sderot, where he was meeting with local residents enduring the ongoing rocket barrages from neighboring Gaza. "Whoever was killed for us was murdered, for us is a victim."

Prime Minister Benjamin Netanyahu said Sunday that Israel would act calmly and responsibly in the face of rising Israeli-Palestinian hostilities.

"Experience proves that in moments like these, one must act calmly and responsibly, not hysterically and hastily," Netanyahu said at the opening of his weekly Cabinet meeting.

His statement came after weekend clashes between Israeli police and demonstrators in Jerusalem and Arab towns in northern Israel following Abu Khdeir's death. On Sunday, Tariq Abu Khdeir, a 15-year-old Palestinian American who was badly injured in clashes with Israeli police, was sentenced to nine days of home detention.

His parents say Tariq Abu Khdeir, who goes to school in Florida, was beaten Thursday by Israeli police during clashes over the killing of Mohammed Abu Khdeir. The two youths were cousins.

As the youth returned to his family Sunday, he was crying and appeared badly bruised, with both eyes and his mouth swollen. "I feel better, I am excited to be back home," he said.

Amateur video of what Tariq's father Salah said was the beating aired on a local television station, and he said he could recognize his son from his clothing.

The U.S. State Department said it was "profoundly troubled" by reports of his beating and demanded an investigation. Israel's Justice Ministry quickly launched a formal investigation.

Protests spread over the weekend from Jerusalem to Arab towns in northern Israel, with hundreds of people throwing rocks and fire bombs at officers who responded with tear gas and stun grenades, according to Israeli police. Police said 22 Arab Israelis were arrested in clashes on Saturday.

Israeli Arabs, unlike Palestinians in the West Bank and Gaza Strip, hold citizenship rights. But they often face discrimination and many identify with the Palestinians. Even so, violent riots like those that occurred on Saturday are rare.

Clashes mostly subsided by early Sunday, but the situation remained tense. Police said a Jewish woman was attacked and lightly wounded early Sunday by a group of Palestinians in Jerusalem's Old City. Her husband fired his weapon and the attackers fled, and police were searching for them, police said.

In the West Bank, the army arrested a Palestinian in the city of Hebron. His family identified him as Hossam Dufesh. The army would not elaborate on the arrest, but Israeli forces have concentrated its search for the killers of three Israeli teens in the Hebron area.