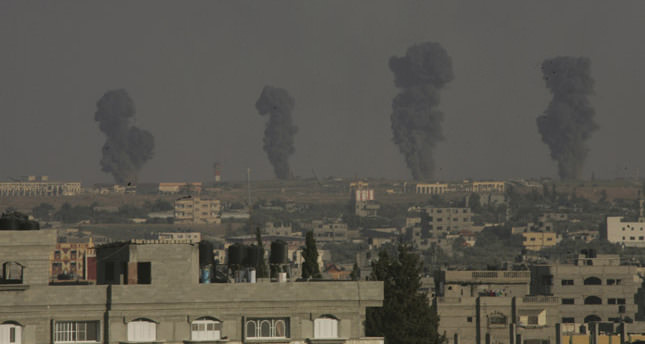 by Jul 07, 2014 12:00 am
Hamas militants in Gaza fired dozens of rockets at Israel Monday, which responded with multiple air strikes in a new escalation which threatened to spiral into another a major confrontation.

It was the worst escalation in and around Gaza since November 2012, with tensions threatening to drag the region into a fresh confrontation as Israel sought to contain five days of violent clashes in Arab localities following the grisly murder of a Palestinian teenager by Jewish extremists.
The barrage of rocket fire was confirmed by the Israeli military which said more than 40 rockets had been fired at the south within a short period. There were no immediate reports of casualties.

Sirens were heard in 10 locations, including in Beit Shemesh some 80 kilometres (50 miles) from the Gaza Strip, a military statement said.
Around 16 struck the area around the southern city of Beersheva, 40 kilometres from Gaza. Beersheva is home to 200,000 people.

The rocket fire was claimed by the Ezzedine al-Qassam Brigades, armed wing of the Islamist Hamas movement which has its stronghold in Gaza.
"Al-Qassam fired dozens of rockets on Netivot and Ashkelon, Ashdod and Ofakim in response to the Zionist aggression," a statement said.

"Qassam rockets are a natural reaction to the Israeli crimes against our people," said Hamas spokesman Sami Abu Zuhri in a statement.

"We are not afraid of your threats and will not surrender to your conditions, we will respond to your crimes."

Shortly afterwards, Israeli warplanes hit more than 30 targets near the southern city of Rafah in an area close to the Israeli border which is riddled with tunnels, Palestinian witnesses and security sources told AFP.

Israel's Channel 1 television said the attacks came after the security cabinet gave the military a green light to "toughen the response to Hamas".

The channel also showed footage of dozens of tanks massing near the border with Gaza, preparing for a possible offensive against the enclave.

"With this barrage of rockets, Hamas has crossed the red line, and unfortunately it will pay for it," senior officials told the private Channel 10 television.

The rocket fire came several hours after Israel staged around 16 air strikes on targets across Gaza, following a night in which warplanes attacked 14 targets, killing at least three militants, one from Hamas and two from the Popular Resistance Committees (PRC).

"The Zionist enemy has opened the gates of hell on itself," the PRC said.

Another five Hamas militants died and one was critically injured when a tunnel collapsed near Rafah, with the armed wing blaming it on an Israeli air strike.

But the Israeli army denied hitting the area, with a spokesman describing it as a work accident by militants mishandling explosives.