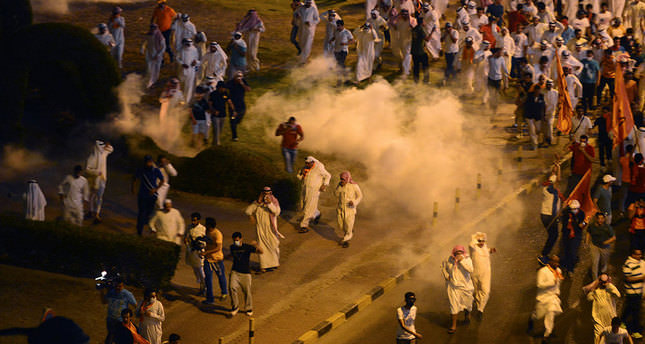 by Jul 07, 2014 12:00 am
Kuwait riot police on Sunday fired tear gas and stun grenades to disperse hundreds of opposition protesters who were demanding the release of a detained opposition leader.

Witnesses said riot police in armoured vehicles fired tear gas and stun grenades at the protesters as soon as they marched toward a courts complex in the capital Kuwait City, forcing them to flee.

Police also chased them into narrow streets of Kuwait City markets to ensure they do not reach the courts complex, where opposition leader Mussallam al-Barrak is scheduled to face trial on Monday.

The protesters, a number of whom were treated for inhaling gas, had earlier rejected appeals by police officers not to march.

The interior ministry said in a statement police had to break up the procession because it was unlicenced, adding it would continue to deal firmly in the future with any such gatherings.

It was the fifth night of violence in Kuwait sparked by the arrest of Barrak, a former MP, on charges of insulting the judiciary.

Earlier in the day, Emir Sheikh Sabah al-Ahmad Al-Sabah discussed the violence with his crown prince and prime minister.

"The prime minister briefed the emir and the crown prince of the events that violate the constitution and the law," said an official statement cited by the state news agency KUNA.

An interior ministry statement blamed demonstrators for the violence, charging that unidentified men threw a petrol bomb at the jail where Barrak has been held for the past five days.

The public prosecutor on Wednesday detained Barrak for 10 days pending trial on charges of insulting the judiciary and slandering the head of the supreme judicial council, Faisal al-Marshed.

The KUNA statement said Sheikh Sabah called on everyone "to comply to preserve the country's security and stability".

The interior ministry said police arrested a number of protesters since Wednesday, with opposition activists saying 25 people had been rounded up.

The opposition has denounced the legal action against Barrak as unlawful and "politically motivated", but the emir on Sunday strongly defended the judiciary.

At a public rally last month, Barrak alleged that former senior officials, including ruling family members, had stolen tens of billions of dollars from public funds and engaged in money-laundering. He also criticised the judiciary.

The scandal was later linked to claims that the same officials were seen in video footage plotting a coup.

Those allegations were made in a lawsuit filed last month by Sheikh Ahmad Fahad Al-Sabah, a senior ruling family member and former energy minister.

Sheikh Ahmad was himself questioned as a witness on Thursday.
Most opposition groups are not represented in parliament after boycotting a July 2013 election in protest at Kuwait's amended electoral law.