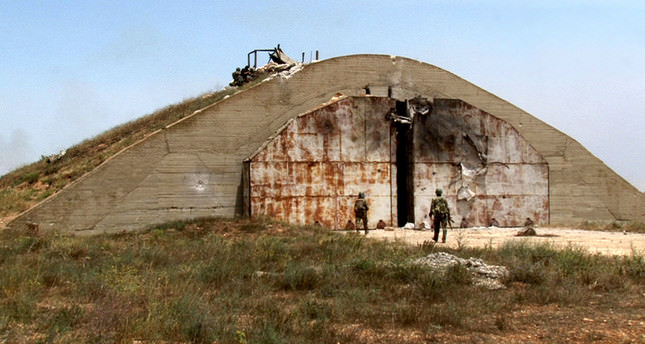 Ban said that on June 14, the Organisation for the Prohibition of Chemical Weapons (OPCW) United Nations Joint Mission overseeing the destruction of Syria's chemical stockpile analyzed the contents of the cylinders.

"The Joint Mission confirmed that these contained sarin," said Ban's letter. The letter said the cylinders were "reportedly seized by the armed forces of the Syrian Arab Republic in August 2013 in an area reportedly under the control of armed opposition groups."

OPCW chief Ahmet Uzumcu said in a report attached to Ban's letter that the Syrian government declared the cylinders "as abandoned chemical weapons," but neither Uzumcu nor Ban stated when they were handed over to the joint mission.

An OPCW report in October mentioned Syrian authorities had found two cylinders, but it was not clear if the cylinders had been handed over to the joint mission at that time.

Syria agreed last September to destroy its entire chemical weapons programme under a deal negotiated with the United States and Russia after hundreds of people were killed in a sarin gas attack in August on the outskirts of the capital, Damascus.

The agreement averted U.S. military strikes in response to the worst chemical weapons attack in decades, which Washington and its European allies blamed on the government of President Bashar al-Assad. Assad blamed the chemical attack on rebels fighting to oust him.

Sigrid Kaag, head of the joint mission, briefed the U.N. Security Council behind closed doors on Monday. Syria handed over the final consignment of its declared 1,300 tonnes of chemicals on June 23. The toxins have been removed from Syria for destruction at sea or in other countries.

But Ban's June 26 letter listed tasks still to be completed for the full elimination of the chemical weapons programme, including "the conclusion of ongoing consultations regarding any possible remaining discrepancies in the original declaration."

Kaag's mission has asked Assad's government to clarify these disparities in its initial declaration of toxic materials.

"It is now essential that every effort be made to achieve the full elimination of the chemical weapons programme of the Syrian Arab Republic at the very earliest opportunity, including the destruction of remaining production facilities and the resolution of any possible remaining technical discrepancies in the original declaration," Ban wrote in the letter.