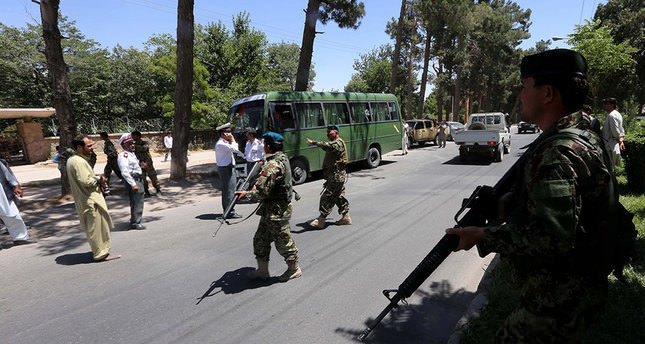 by Jul 08, 2014 12:00 am
A Taliban suicide bomber killed 16 people, including 10 civilians and four NATO soldiers, in an attack in eastern Afghanistan Tuesday, officials said, as foreign troops wind down their war against the insurgents.

The Taliban claimed responsibility for the attack, saying one of its suicide bombers had blown himself up near a NATO patrol in the province of Parwan, north of the capital Kabul.

The attack comes as Afghanistan is mired in political crisis, with a bitter row raging over allegations of fraud in the presidential runoff election.

"Four International Security Assistance Force service members died as a result of an enemy forces attack," a statement from the NATO mission said.

In line with coalition policy, it did not name the nationalities of the victims.

The insurgents said 15 US special forces soldiers were killed. They routinely make exaggerated claims after such attacks.

NATO's combat mission will wrap up at the end of this year, with 10,000 US troops staying into next year if the new president signs a security deal with Washington.

About 3,450 coalition troops have been killed in Afghanistan since operations began in 2001 when the Taliban regime was ousted from power.

US Secretary of State John Kerry warned Tuesday that any attempt to seize power in the election crisis would cost the country its international aid.

Initial results released on Monday showed former World Bank economist Ashraf Ghani had won the election, but a spokesman for his poll rival Abdullah Abdullah rejected the outcome as "a coup against the will of the people".