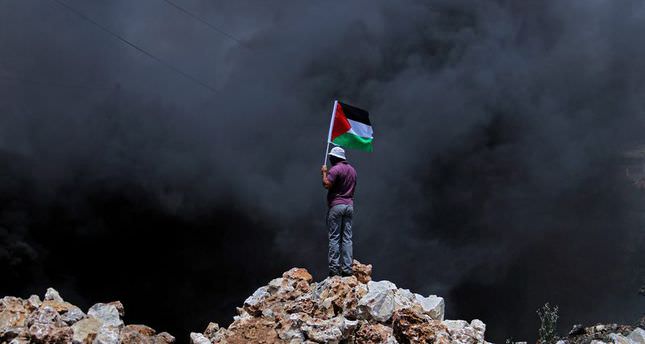 by AA Jul 09, 2014 12:00 am
A senior official from Palestinian resistance faction Hamas on Wednesday warned that Israel's ongoing military onslaught on the Gaza Strip would lead to a "third intifada" (uprising) in the Palestinian territories.

"We are on the threshold of changes that will have strategic ramifications for the Palestinian cause and the entire Middle East region," Osama Hamdan, Hamas' foreign relations chief, told Anadolu Agency by phone.

He said Israel's assault on the Gaza Strip had already climaxed, noting that recent Israeli violations had first begun in the occupied West Bank, leading to the death of scores of Palestinians and the detention of hundreds.

Hamdan added that Israeli forces had raided Palestinian villages in the total absence of Palestinian security personnel, going on to accuse the latter of collaborating with Israel to detain Palestinians.

Three days after the disappearances, Israeli Prime Minister Benjamin Netanyahu accused Gaza-based Hamas of having kidnapped the trio.
Israel has intensified its air campaign against Gaza over the past two days, killing 35 Palestinians so far and injuring scores.

According to Hamdan, Israel has been stunned by intelligence information on the capabilities of the Palestinian resistance.

"Israel had thought that expanding military operations in Gaza would be easy," he said.

He added that rockets fired by the Al-Qassam Brigades, Hamas' military wing, had reached as far as Haifa some 80km from Gaza.

The brigades, he asserted, were also able to attack an Israeli naval base in Ashkelon and blow up a tunnel under the Karam Abu Salem border crossing.
He described the above operations as "only the beginning" of resistance activity against Israel.

"The resistance has a lot up its sleeve to counter Israeli aggression," Hamdan said.

He called on Arabs and Muslims to support the Palestinian cause, saying those who had "wronged" Hamas in the past would now have a chance to redress their mistakes by supporting the Palestinian people.

Hamdan called for reopening the Rafah border crossing between Egypt and the Gaza Strip so that medical supplies might be brought into Gaza.

By launching repeated airstrikes on Gaza, he asserted, Israel was hoping to derail an April reconciliation agreement between Hamas and the West Bank-based Fatah movement.