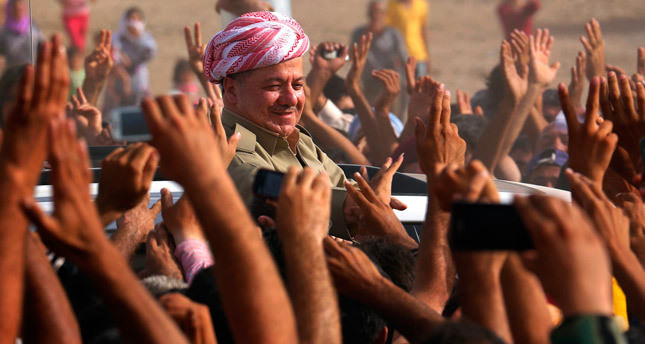 And in scenes reminiscent of the country's brutal sectarian war of 2006-07, when tens of thousands were killed, the authorities found the bodies of 53 men who had been bound and executed in a confessionally-mixed province south of Baghdad.

The crisis triggered by a extremist-led offensive that started exactly a month ago and soon overran swathes of five provinces north and west of Baghdad, has displaced hundreds of thousands of people and heaped pressure on Maliki as he bids for a third term.

The incumbent on Wednesday appeared to damage his efforts to retain his post by turning on Kurdish leaders whose support he needs, accusing them of hosting militant groups behind the onslaught.

Daash is the former Arabic acronym for the self-proclaimed Islamic State of Syria and Sham (ISIS), which Kurdish forces are fighting against in north Iraq, while Baath refers to the banned party of executed dictator Saddam Hussein, whose regime killed tens of thousands of Kurds.

"They (militant groups) will lose, and their host will lose also because he did not provide an example of patriotic partnership," the premier said.

Though Kurdish parliamentary backing is not necessary to form a government, the Kurds are seen as crucial to maintaining a united front against insurgents led by the ISIS.

Maliki's remarks were the latest example of persistent disunity among Iraq's politicians despite calls from international powers and influential Iraqi clerics for the country's leaders to come together.

Bickering blocs have so far failed to form a government, more than two months after April 30 polls, with little sign of an agreement in sight.

An earlier parliamentary session ended in disarray as lawmakers traded threats and walked out.

The country's leaders typically agree key government positions in a package, with the post of speaker generally going to a Sunni Arab, the premiership to a Shiite Arab and the presidency to a Kurd.

Despite telling AFP in 2011 that he would not seek a third term, Maliki vowed last week he would not bow to mounting international and domestic pressure to step aside and allow a broader consensus government.

The crisis, which the UN has warned threatens "Syria-like chaos", has sharply polarised the country's various communities and raised the spectre of a return to the all-out sectarian bloodletting that plagued Iraq years earlier.

In scenes harking back to the brutal 2006-07 period, the authorities discovered the corpses of 53 men in orchards south of Babil provincial capital Hilla, all with gunshots to the head and chest.

A morgue official said the victims were killed at least a week ago.

It was not immediately clear why the men were killed, officials said.

Although attacks have taken place in Babil province since the ISIS-led offensive began, the area where the bodies were found was not close to the sites of other recent violence.

Between northern Babil and southern Baghdad lies the Triangle of Death, a religiously-diverse region known for the ferocity of its sectarian violence in the years after the US-led invasion of 2003.

Iraqi forces have largely regrouped after the debacle that saw soldiers abandon their positions as extremist militants conquered second city Mosul and advanced to within a short drive of Baghdad.

But while Iraq has received support, including equipment, intelligence and advisers from the United States, Russia, Iran and even Shiite militias it once shunned, efforts to battle the militant offensive have languished.

A nearly two-week operation to retake Saddam's hometown of Tikrit has made little progress and with government forces still looking for a major victory, the fighters of the ISIS appear to be brimming with confidence.

A few days after declaring the establishment of a "caliphate", the group's leader Abu Bakr al-Baghdadi -- second only to Al-Qaeda chief Ayman al-Zawahiri on the US most wanted list -- delivered a Friday sermon in Mosul's largest mosque.