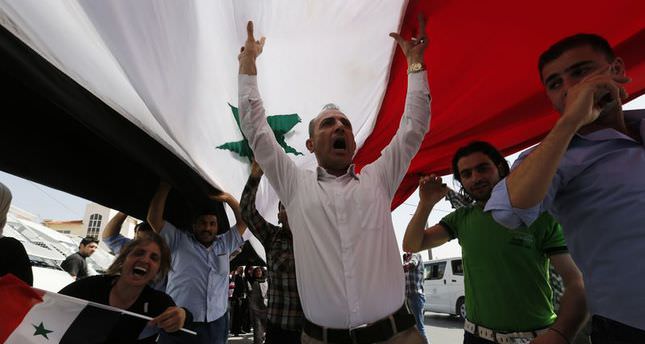 by Jul 09, 2014 12:00 am
Only four percent of Syrians believe self-proclaimed Islamic State insurgents, who have captured large swathes of Syria and Iraq, represent their interests, according to research conducted by a British polling group published on Wednesday.

The survey, conducted by Opinion Research Business (ORB) with 1,014 adults in face-to-face interviews, found that about one in three Syrians believe President Bashar al-Assad and his government best represent Syrians' interests.

Syria's three-year-old civil war began with pro-democracy protests but the Assad government cracked down hard on them, leading his opponents to take up arms and to become increasingly radicalized.

This year the rebel groups have been sidelined by fighters of the self-proclaimed Islamic State, an al Qaeda offshoot, who execute Shi'ite Muslims and have enforced a strict interpretation of Islam in areas they control that has angered and horrified many civilians.

The self-proclaimed Islamic State, previously known as Islamic State in Iraq and al-Sham (ISIS), also wants to erase national boundaries from the Mediterranean to the Gulf.

Assad's forces have managed to hold on to the capital Damascus and strategic areas along the coast.

The ORB research covered 12 of Syria's 14 provinces, in areas controlled by both the government and various opposition groups, including in Raqqa, ISIS's stronghold.

Deir al-Zor, where ISIS militants have taken ground, was not covered. Quneitra, which is split between Assad's forces and rebels, was also left out of the survey.

ORB's Heald said the survey was carried out by local Syrian interviewing teams during May. He said the poll was not privately commissioned but an internal initiative because "very little research is done on public opinion in Syria".

Founded in 1994, ORB specialises in polling in conflict zones and has worked in the past with the British and U.S. governments and with the United Nations.