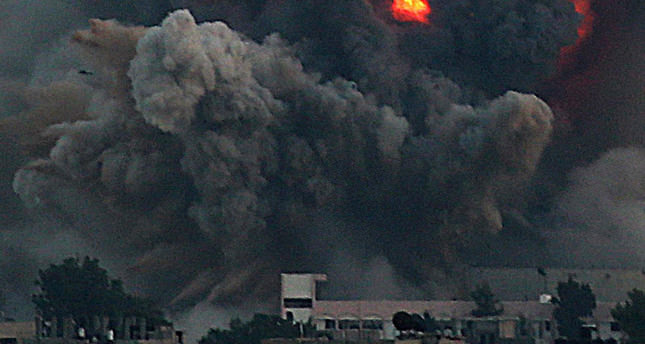 by AA Jul 09, 2014 12:00 am
Horrific images of the Palestinian victims of recent Israeli airstrikes on the Gaza Strip have revealed that the self-proclaimed Jewish state is using internationally-proscribed weapons, according to Palestinian doctors and rights activists.

Palestinian Health Ministry spokesman Ashraf al-Qodra said the bodies of most victims had been incinerated, while others had been completely torn apart.

He said Israel was deploying weapons that destroy the bodies of their victims, noting that a preliminary survey of victims' bodies revealed the horrific nature of the weapons being used in Israel's ongoing onslaught on Gaza.

He called on international rights organizations to bring Israel to account for what he called "its continual violations" against the Palestinian people.

Eyewitnesses, meanwhile, have reported that Israeli airstrikes had incinerated the bodies of Palestinians who happened to be near targeted sites.

Israeli warplanes, they added, were using missiles that destroy their victims' bodies, often cutting them to pieces.

Some activists posted photos of victims online, advising the fainthearted not to look at them.

Photos showed Palestinians whose limbs had been blown off and others whose bodies looked as if they had been subject to chemical attack.

Palestinian doctors say the Israeli airstrikes had incinerated the bodies of a large number of Palestinians, while a number of others had lost limbs.

They added that the conditions of victims admitted to hospital revealed that Israel was using internationally-proscribed weapons in its current war on the embattled Gaza Strip.

Israel has been launching relentless airstrikes against Gaza since Tuesday, in which 41 Palestinians have been killed so far.

Palestinian Authority President Mahmoud Abbas described the current Israeli onslaught on Gaza as a "war on the entire Palestinian people."

"It is also violating international and humanitarian law conventions by targeting civilians," Younis, the head of the Al-Mezan Center for Human Rights, a Gaza-based NGO, told AA.

He said Israel was targeting women and children, whose bodies were turned to charcoal as a result of the attacks.

He went on to urge international rights groups to intervene to stop Israeli aggression against the Palestinian people.

In 2009, Human Rights Watch accused Israel of using internationally-banned weapons in its three-week-long war on Gaza in late 2008/early 2009.

Israel, for its part, continues to deny that it uses banned weapons.