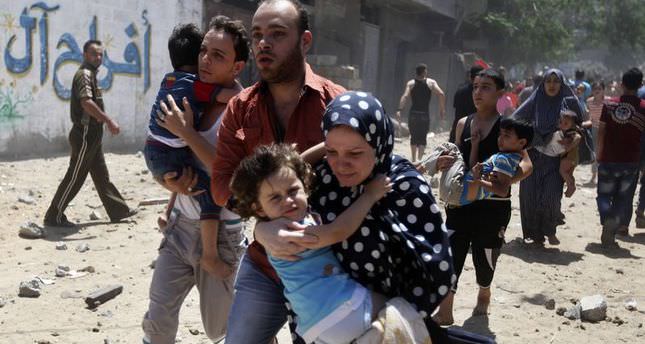 by AA Jul 10, 2014 12:00 am
Around half of Palestinians killed thus far in a fresh Israeli operation in the Gaza Strip are women and children, according to the latest estimates by the Palestinian Health Ministry Thursday.

Twenty-three children and 12 women are among 75 Palestinians killed in Gaza since the beginning of a large-scale Israeli operation in the Strip late Monday, according to the health ministry's statement.

Earlier on Thursday, three Palestinians were killed and four other seriously injured when Israeli aircraft targeted a vehicle in eastern Gaza City, according to medical sources, which brought the death toll from the Israeli operation thus far to 75, according to an earlier statement by Palestinian Health Ministry Spokesman Ashraf al-Qodra.

According to Palestinian security sources, Israeli warplanes have conducted more than 770 strikes against Gaza targets during the same period.

Palestinian factions have, for their part, fired nearly 320 rockets into Israeli cities and towns since Wednesday, added the sources.