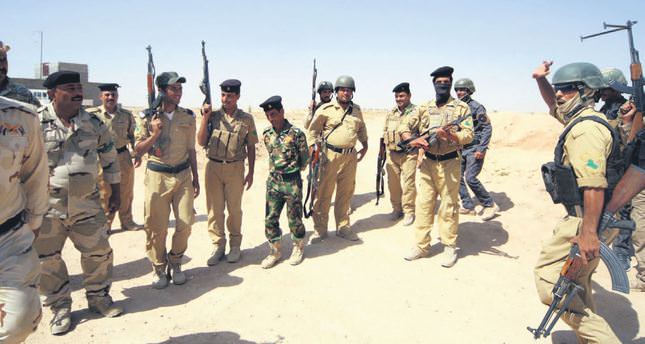 by Anadolu Agency Jul 10, 2014 12:00 am
Iraq's government has lost control of a former chemical weapons facility to ISIS and is unable to fulfill its international obligations to destroy toxins kept there, the country's U.N. envoy has told the United Nations.

In a letter to U.N. Secretary-General Ban Ki-moon, made public on Tuesday, Ambassador Mohamed Ali Alhakim said the Muthanna facility north of Baghdad was seized on June 11. He said remnants of a former chemical weapons program are kept in two bunkers there. "The project management spotted at dawn on Thursday, June 12, 2014, through the camera surveillance system, the looting of some project equipment and appliances before the terrorists disabled the surveillance system," Alhakim wrote in the letter dated June 30.

ISIS is spearheading a patchwork of insurgents who have taken over large swaths of Syria and Iraq. The group, an al-Qaeda offshoot, until recently called itself the Islamic State in Iraq and al-Sham (ISIS). "The government of Iraq requests the members states of the United Nations to understand the current inability of Iraq, owing to the deterioration of the security situation, to fulfill its obligations to destroy chemical weapons," he said. Iraq would resume its obligations when the security situation improves and it has regained control of the facility, Alhakim said.

U.S. Defense Department spokesman Rear Admiral John Kirby said last month that the United States' best understanding was that "whatever material was kept there is pretty old and not likely to be able to be accessed or used against anyone right now." "We aren't viewing this particular site and their holding it as a major issue at this point,"

Kirby said. "Should they even be able to access the materials, frankly, it would likely be more of a threat to them than anyone else." On Wednesday, Iraqi security forces found 53 corpses, blindfolded and handcuffed, in a town south of Baghdad early on Wednesday, local officials said.

They said the bodies had been left in the mainly Shi'ite Muslim village of Khamissiya, about 25 km (15 miles) southeast of the city of Hilla, near the main highway running from the capital to the southern provinces.

The head of the provincial council, local police and the governor's office all confirmed the discovery of the bodies, but had no immediate information on the identity of the dead, who appeared to have been killed execution style. The bodies were found at 2 a.m. (2300 GMT) on Wednesday, they said.

ISIS fighters seized control of large parts of northern and western Iraq last month, sweeping towards Baghdad in the most serious challenge to the Shi'ite-led government of Prime Minister Nuri al-Maliki since the withdrawal of U.S. forces in 2011.

Fierce fighting between ISIS and the army has raised fears of a return to the devastating sectarian bloodshed which peaked in Iraq in 2006 and 2007.

ISIS militants have been carrying out attacks around the southern rim of Baghdad since the spring. In response, Shi'ite militias have been active in the rural districts of Baghdad, abducting Sunnis they suspected of terrorism, many of whom later turn up dead.

On Wednesday, Iraqi Prime Minister Nuri al-Maliki said the Kurdish-controlled city of Arbil was becoming an operations base for ISIS that seized swathes of northern and western Iraq last month.

Maliki is under pressure as Sunni Muslim militants, led by the al Qaeda offshoot Islamic State, hold large parts of the north and west of the country and have threatened to march on the capital. "We will never be silent about Arbil becoming a base for the operations of the Islamic State and Baathists and Al Qaeda and the terrorists," Maliki said in his weekly televised address.

Maliki's relationship with Kurdish President Massoud Barzani has deteriorated amid the sectarian insurgency that has threatened to split the country.
Barzani last week asked the parliament of the autonomous Kurdish region to plan a referendum on Kurdish independence, signaling his impatience with Baghdad. Maliki, meanwhile, has accused the Kurds of exploiting the crisis to push for statehood.
RELATED TOPICS