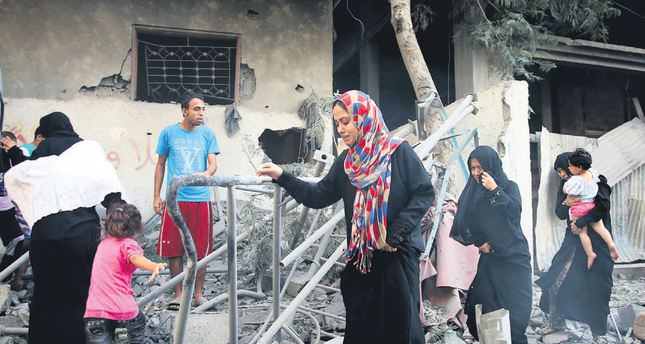 by Daily Sabah Jul 10, 2014 12:00 am
The Israeli airstrikes on the Gaza Strip have provoked a significant reaction from the international community who have called on the U.N. Security Council to take serious measures to stop the ongoing violence in the strip.

Following the Israeli military's announcement yesterday stating that a sizeable number of ground troops have been mobilized to the Gaza border, the Chairman of the Arab Parliament Ahmad Al-Jarwan urged the U.N. Security Council to condemn Israel's plan of a possible ground invasion to Gaza, according to the Kuwait News Agency.

In addition, the Russian Ministry of Foreign Affairs condemned the Israeli "use of unnecessary force against the Palestinian citizens."

Japan and Jordan have also issued statements to condemn Israeli attacks on Gaza. Jordan demanded an immediate halt to deadly Israeli raids and called it "barbaric."

Via press release from Japan's representative office: "Japan is deeply concerned about the situation in which the Israeli Air Force strike has caused civilian casualties in the Gaza Strip and strongly condemns rocket attacks by Palestinian militants in the Gaza Strip against Israel."

Thousands of people around the world also protested Israeli aggression on Gaza.

Demonstrators gathered yesterday to make their voices heard at the Israeli Consulate in New York City, where they condemned Israeli airstrikes as well as media companies for their coverage of the conflict.

Hundreds of demonstrators gathered in front of the Israeli embassy in the Jordanian capital Amman and condemned Israel for its ongoing deadly airstrikes on Gaza.

People also gathered at the Place du Luxembourg in Brussels and chanted slogans against Israel.

Meanwhile, the United Arab Emirates pledged $25 million in humanitarian aid Thursday to "support the steadfastness" of Palestinians in Gaza where Israeli strikes have killed more than 70 people in three days.

The Emirati Red Crescent will supervise delivery of the aid, WAM state news agency said, adding that the aid organisation will also set up a field
hospital in Gaza "to help the victims of the Israeli aggression".