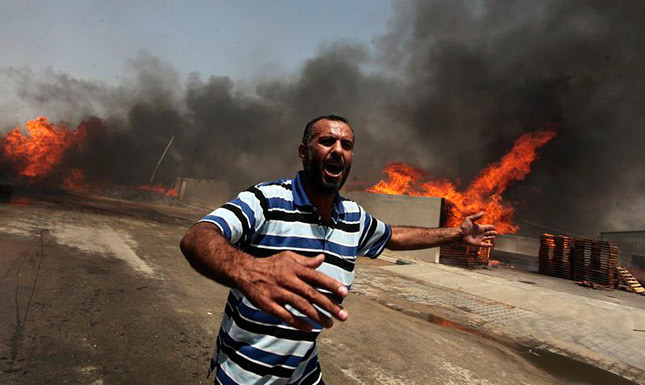 by Daily Sabah with Agencies Jul 11, 2014 12:00 am
The total number of Palestinians killed by Israeli airstrikes on the Gaza Strip since Monday has reached 166, according to a Palestinian Health Ministry official.

"At least 166 people have been killed and around 1120 injured since the start of the Israeli military operation," Health Ministry spokesman Ashraf al-Qodra told Anadolu Agency on Sunday.

According to the latest figures from the U.N. Office for the Coordination of Humanitarian Affairs (OCHA), 70 percent of Gaza fatalities are civilians, of which 30 percent are children.

The toll made Saturday the bloodiest day yet in the five-day conflict, and hiked the overall toll to 163.

The deadliest strike came in the Tuffah district in eastern Gaza City, where 18 people were killed in strikes that hit a home and a mosque, emergency services spokesman Ashraf al-Qudra said.

Among at least 50 people injured in the strike was Hamas police chief Tayseer al-Batsh, who was reportedly in critical condition.

Elsewhere, three people were killed in Rafah in southern Gaza, and one person in Jebaliya, in the north of the coastal enclave.

The evening strikes came after Hamas launched a barrage of long-range rockets at Israeli cities including Tel Aviv, after issuing a warning that it would strike.

And six men, including two nephews of former Hamas premier Ismail Haniya, were killed in an afternoon strike on the Sheikh Radwan district of western Gaza City.

Their deaths followed an early morning strike that killed two women at a charitable association housing the disabled in Beit Lahiya in northern Gaza.

Four others were wounded in the attack -- three residents and a helper, she said.

Another three people were killed in eastern Gaza City and three in an attack on the western side of town in early Saturday attacks.

Earlier, Qudra announced the deaths of eight other Palestinians in raids that hit targets including a bank, two mosques and the houses of Hamas officials.

Israel's military said at least one of the mosques was being used to store weapons.

On Friday, the United Nations said 77 percent of those killed in the Israeli raids were civilians.

Gaza militants have fired approximately 525 mortar rounds and rockets that struck Israel, while another 138 rockets were intercepted by the Iron Dome missile defence system, the army said Saturday.

It is the deadliest violence since November 2012, with a growing number of rockets fired at Jerusalem and Tel Aviv and even as far north as Hadera, 116 kilometres (72 miles) away.

So far, no Israelis have been killed.

One Israeli soldier was severely wounded in a mortar attack Thursday, and another man very seriously injured when a rocket hit a petrol station in the southern port city of Ashdod on Friday.

Two soldiers were slightly wounded along the border with Gaza when Palestinians fired an anti-tank missile.

Israel has authorised the call-up of 40,000 reservist troops and threatened to escalate to a ground operation.

Israel's prime minister vowed Friday to press forward with a broad military offensive in the Gaza Strip, insisting international pressure will not halt what he said was a determined effort to halt rocket fire by Palestinian militants.

Addressing a news conference, Netanyahu brushed off a question about possible cease-fire efforts, signaling there was no end in sight to the operation.

"I will end it when our goals are realized. And the overriding goal is to restore the peace and quiet. No international pressure will prevent us from acting with all power," Netanyahu said.