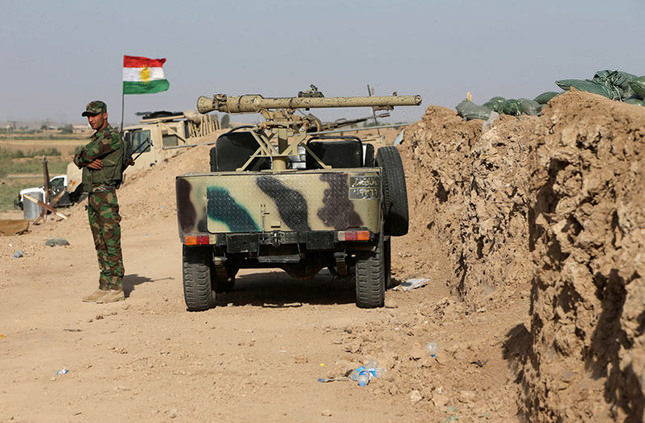 by Associated Press Jul 12, 2014 12:00 am
Kurdish security forces took over two major oil fields outside the disputed northern city of Kirkuk before dawn Friday and said they would use some of the production for domestic purposes, further widening a split with the central government of Prime Minister Nouri al-Maliki.

The takeover of the Bai Hassan and Kirkuk oil fields were the latest land grabs by Kurds, who have responded to the insurgency that has overrun large parts of Iraq by seizing territory of their own, effectively expanding the Kurdish autonomous zone in the north. Those moves have infuriated al-Maliki's government while stoking independence sentiment among the Kurds.

Kurdish fighters known as peshmerga pushed into the city of Kirkuk, a major hub for the oil industry in the north, and the surrounding area weeks ago in the early days of the militant blitz. But until now they had not moved into the oil fields in the area. On Friday, however, the fighters took over the Bai Hassan and Kirkuk fields and expelled local workers, the Oil Ministry in Baghdad said.

Oil Ministry spokesman Assem Jihad denounced the move as "a violation to the constitution" and warned that it poses "a threat to national unity."

The Kurdish Regional Government said its forces moved to secure the fields after learning of what it said were orders by officials in the Oil Ministry to sabotage a pipeline linking oil facilities in the area. It said production would continue, and that staff can return but will operate under Kurdish management.

Production from the fields will be used to fill the shortage of refined products in the domestic market, it said, in a reference to a fuel crunch in the Kurdish region. It also said the Kurdish Regional Government will claim its "constitutional share" of revenues from the fields to compensate for Baghdad's cutting off the 17 percent of the state budget some $20 billion in this year's projected budget that is supposed to be given to the Kurdish region.

The central government withheld the funds after the Kurds began moving oil from fields inside the autonomous zone to Turkey independently against Baghdad's wishes.

The Kurds have said their earlier moves into disputed lands were intended to protect the areas from militants after the collapse of the Iraqi military in the face of the insurgency the past month. But the territory they seized has large Kurdish communities and has long been claimed by the autonomy zone.

In past weeks, the president of the Kurdish zone has said the areas won't be returned including the highly disputed, flashpoint city of Kirkuk and he called for Kurdish lawmakers to prepare to hold an independence referendum in the area, a move strongly opposed by Baghdad and the United States. Sunni Arabs and ethnic Turkmens who also claim Kirkuk as theirs have warned of a backlash if Kurds try to monopolize the oil in the region.

The Kurds and Baghdad have feuded for years over oil resources, disputed territory and a host of other issues. Yet, they have also found room for compromise, and the Kurds have provided critical backing to help al-Maliki become prime minister.

But their ties are rapidly unraveling as the country fragments in the face of the militant blitz, led by the [self proclaimed] Islamic State extremist group. The country is effectively being cleaved along ethnic and sectarian lines the swath of militant-held Sunni areas, the Shiite-majority south and center ruled by the Shiite-led government in Baghdad and the Kurdish north.

The six incidents appear to be aimed at avenging the deaths of Shiites captured and killed by the militant group.

The Kurds also find themselves fighting the militants across the northern front. On Friday, a suicide bomber blew himself up at a peshmerga checkpoint outside Kirkuk, killing 28 people and wounding 30, said Kirkuk police chief Maj. Gen. Torhan Abdul-Rahman Youssef. The explosion set several vehicles in the vicinity on fire.

Hospital officials confirmed the casualty figures. They spoke on condition of anonymity because they weren't authorized to brief the media.

In recent days, the political divisions between Baghdad and the Kurds have grown increasingly bitter. On Wednesday, al-Maliki accused the Kurds of harboring militants.

The Kurds responded by declaring their politicians will boycott Cabinet meetings, renewing demands that al-Maliki step down.

Al-Shahristani said he himself was appointed acting foreign minister to stand in for Hoshyar Zebari, who was one of the most prominent Kurds in the government and has been Iraq's top diplomat for more than a decade.

The dispute comes as al-Maliki is struggling to fend off an attempt to remove him from his post by political factions including the Kurds but also from former Shiite allies who blame him for the failures to confront the Sunni offensive and have long accused him of monopolizing power.

In Baghdad, national lawmakers are struggling broker an agreement on a new government and leadership, including the posts of prime minister, president and speaker of parliament, after April elections.

The legislature is scheduled to meet Sunday for its second session amid calls for the quick formation of a new government that can confront the militants and hold the country together. Al-Maliki, whose State of Law bloc won the most seats in the elections, has shrugged off calls to step aside.

The United States and other world powers, as well as Iraq's top Shiite cleric, have pressed for a more inclusive government that Iraqis of all stripes can rally around.

On Friday, Ayatollah Ali al-Sistani again urged lawmakers to move swiftly toward a compromise, calling on them to "rise above selfish aims."

"The challenges ... threaten civil peace and the unity of the social fabric and forecast a divided and disputed future for Iraq," Abdul-Mahdi al-Karbalaie, a cleric who represents the reclusive al-Sistani, told worshippers in a sermon Friday in the holy city of Karbala.