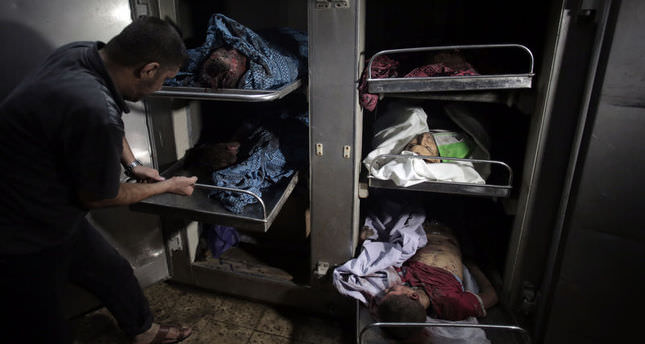 by AA Jul 13, 2014 12:00 am
The total number of Palestinians killed by Israeli airstrikes on the Gaza Strip since Monday has reached 166, according to a Palestinian Health Ministry official.

"At least 166 people have been killed and around 1120 injured since the start of the Israeli military operation," Health Ministry spokesman Ashraf al-Qodra told Anadolu Agency on Sunday.

According to the latest figures from the U.N. Office for the Coordination of Humanitarian Affairs (OCHA), 70 percent of Gaza fatalities are civilians, of which 30 percent are children.

Israel has launched a military offensive – dubbed "Operation Protective Edge" – with the stated aim of ending rocket fire from Gaza.

According to an earlier tally by the ministry, at least 33 children and 16 women were among the fatalities of the Israeli onslaught.
Last Update: Jul 13, 2014 1:50 pm
RELATED TOPICS