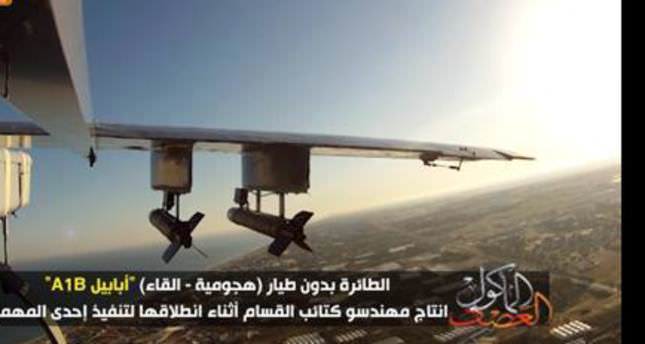 by AA Jul 14, 2014 12:00 am
The Ezzeddin al-Qassam Brigades, Hamas' armed wing, has revealed that its engineers had managed to manufacture three different types of aerial drone, which the group says are designed to carry out "special operations" inside Israel.

In a statement, the Brigades said it had launched three homemade drones-dubbed 'Ababil 1'-over Israel on Monday on various missions. Contact with two of the drones, however, had been lost, it noted.

It went on to claim that one of its drones had already "carried out specific missions" over Israeli Defense Ministry headquarters in Tel Aviv.

According to the Brigades, the drone's "A1A" type is designed for carrying out reconnaissance; the "A1B" for attack and bomb-dropping missions; and the "A1C" for kamikaze missions.

On Monday, the Israeli army said it had shot down a Hamas drone over Ashdod.

Since last Monday, Israeli warplanes have staged hundreds of airstrikes across the strip-which is home to some 1.8 million Palestinians-while ground troops remain amassed on the borders in advance of a possible ground assault.

At least 173 Palestinians, mostly civilians, have been killed in unrelenting Israeli aerial attacks.